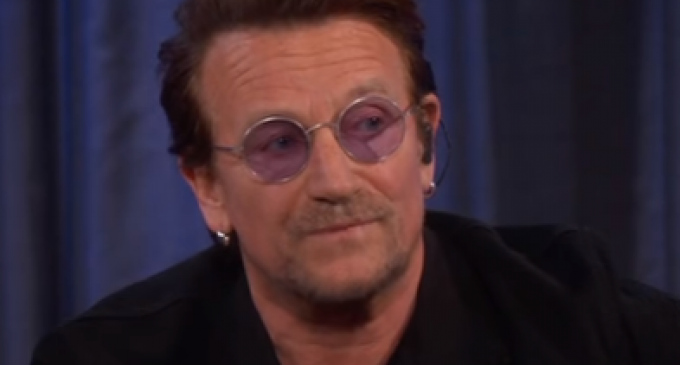 On the Jimmy Kimmel show, the band members of the group U2 showed up to talk about their careers, their activist work, the world at large, terrorism, After the small stint of acapella, he launched right into his softball question, designed specifically for his Trump-despising audience.

He directed the question toward Bono, of course, being that the lead singer has been an outspoken political figure for many years.  Bono is one of those celebrities who likes to pretend that he's friends with an array of ALL the political parties when, in fact, he despises anything Conservative (true Conservative) as much as the next Progressive.

But, like any good Liberal, he decided to put on a serious face and get somewhat sullen and empathetic, acting as if he was searching for a diplomatic way of saying how much he believes that Trump is a stooge.  Stopping just short of that, he went into his critique of how he knew that Trump really doesn't care about people (at least not the ones that are hurting the most) and that, basically, Trump boils down to a person obsessed with himself and so wrapped up in seeing a sea of faces at his rallies that once he departs the stage, he talks derogatorily about those same supporters.

In true Liberal form, the audience laughed at just the right moments so that the band would feel that they were at least in friendly territory.  Not that they weren't already aware of that.  Let's face it:  if you're any Liberal and you appear on any of the major networks, you're more welcome than even Hillary Clinton, and that's saying a lot.  Hillary may be the Queen of Mean, but they have the celebrity status after all and there's nothing more amazing than that (except maybe if you mix the two, like when Bill plays the sax on SNL or Al Franken runs for Congress).

KIMMEL:  Bono…[stutters]…I've heard your story about how you traveled around the country and you spoke to many senators, many Conservatives, many Republicans…um…in your fight against AIDS…to help you.  You worked with not only President Clinton, but really with President Bush very closely.  Is President Trump someone you would like to meet with and work with?