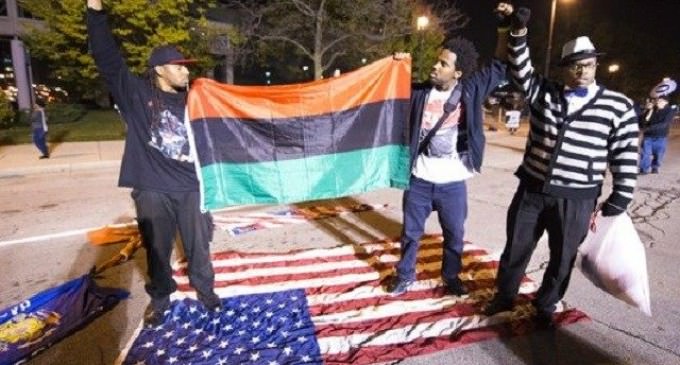 Protesters affiliated with the anti-police, Black supremacist movement Black Lives Matter have burned an American flag and raised the Black Liberation flag to protest the shooting of an alleged unarmed black man by a police officer.

This reactionary stance is nothing new to the Black Lives Matter protesters, who have been so ingrained in their dogma that they no longer look to facts or evidence but move on the first sign of opportunity to defame and assault the efforts of the police. There is no appropriate conduct or standard operating procedure that will ever satisfy the movement, as it is rooted in the leftist demand for more welfare and housing benefits for the disproportionately-dependent Black population.

The brother of the man who was shot by the police is reported to have said that he would like to see the Constitution abolished, as he felt it did not equitably treat Black Americans. There was of course no comment on what holy document or philosophy the Constitution should be replaced with.

Find out more about the Black Lives Matter protesters on page 2.