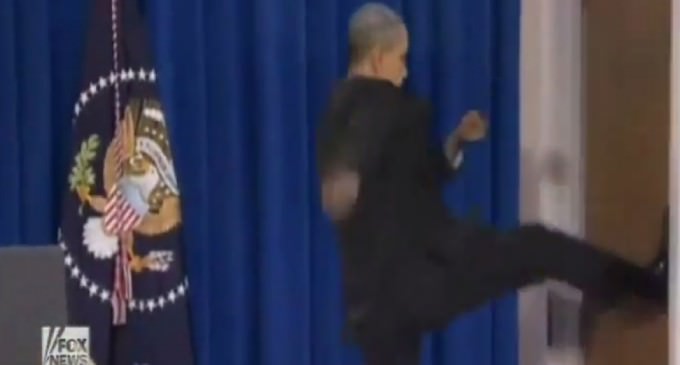 Students at McGill University in Montreal, Canada, have gone stark raving mad and had their tender feelings bruised from seeing an emailed picture of Barack Obama kicking open a door. These self-indulged, overly sensitive, and unbalanced children need to get a life, but instead are taken seriously as they scream about injustice and demand retribution. What they need is to have their butts kicked out of school and be forced to experience the real world for awhile. Unfortunately, they are instead given respectful credence for their outrageous demands.

In this particular case, an edited .gif photo was shown on the Tonight Show by Jay Leno. It depicted President Obama kicking open a door, which was intended to humorously represent his frustration with press conferences. It was an obvious set up, and the show is known poking fun at public figures and politicians. Brian Farnan, a student and vice president of McGill student government, re-purposed the photo and sent it out in an email to show his frustration with mid-terms. All, one would think, with the objective of a lighthearted commentary on student life.

See page 2 for the bizarre consequences: