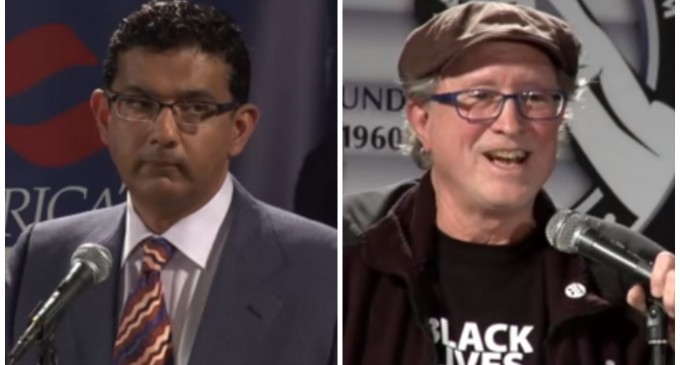 Retired liberal professor Bill Ayers has lived a privileged life as a college professor, a writer, a speaker, and an unrepentant attempted murderer and communist thug. His constant refrain is how horrible the United States is, how unfair it is, and how the police are nothing but racist bums who repress the poor and the underclass.

Back in the Vietnam War era, he was also a radical terrorist as a member of the Weather Underground, a group of violent, privileged white radical punks who fancied themselves as a communist advance force engaged in bringing down the United States. He has never paid for his crimes, and he has enjoyed the wealth and societal prestige afforded to Leftist radicals who hate this country. He is also a friend of President Barrack Obama, and likely the ghost writer of Obama’s book Dreams of My Father.

Dinesh D’Souza is from India, but has been in the U.S. for many years, and served as a young man in the Reagan administration. He is a writer, film maker, and a conservative intellectual who has embraced the United States and the freedoms and opportunities it affords all who live here with a fervor that is energizing.

On Wednesday, the two met in a debate that took place at the University of Michigan. They debated many topics, but of particular interest was their clash regarding the U.S. criminal justice system, in part because both of them have had to deal with it.

More on the debate differences, page 2: