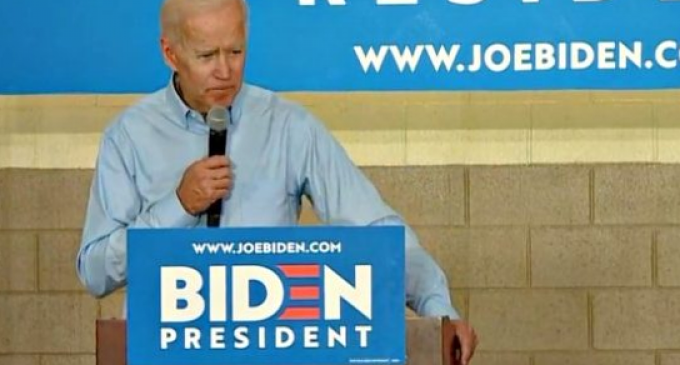 Former Vice President and 2020 candidate Joe Biden took ‘Trump-like' shots the President on Saturday, calling him a “clown” who was helping “Jim Crow” racism to return to the U.S. Biden will surely give the nation quite a show should he win the primary – trying to out-Trump Trump will provide for endless entertainment.

Putting Biden in the running against Trump would be a huge gift to conservatives and prove for once and for all that Dems really shouldn't be involved in any thinking process that is political in nature.

First, Biden is really up there in years. This is not ageism. While older folk perform many jobs well, the U.S. presidency is a particularly grueling position, wearing down even the fittest of people – although President Trump seems to be less affected by the stress than those who came before him. Biden would be 78 when starting his first term as president – eight years older than Trump was in 2016 and nine years older than Ronald Reagan in 1980.

Second, Biden is symbolic of the old Democratic party. Liberal voters are increasingly non-white and female and will see Biden as the Democratic party run by and for white men.

Third, the twice-failed presidential candidate is a 24/7 gaffe machine. This will, unfortunately, end up killing his chances to win the primary. The guy gaffed in March when he unintentionally hinted his candidacy in the upcoming election.

While delivering a keynote speech for the Delaware Democratic Party, Biden claimed he had “the most progressive record of anybody running.”

“I am a gaffe machine,” Biden admitted in December 2018 when asked about potential liabilities of his campaign. “But my God what a wonderful thing compared to a guy who can’t tell the truth,” he said.

Biden's latest shot at Trump reveals incompetence. Jim Crow laws enforced racial segregation in the Southern United States and were enacted in the late 19th and early 20th centuries by white Democratic-dominated state legislatures. Thanks for giving conservatives an opportunity to point out the hypocrisy of Democrats!

Turn the page for Biden's shot at President Trump.