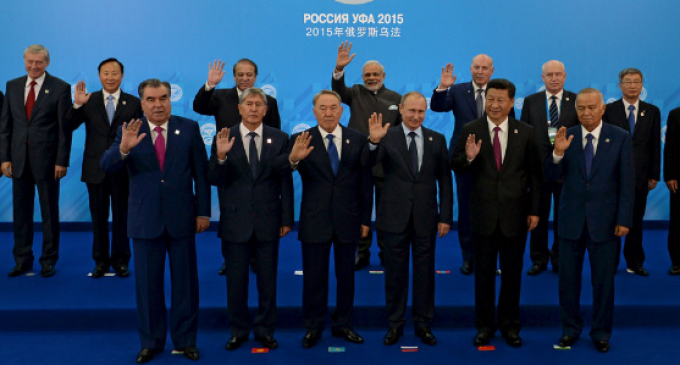 If we could look into a crystal ball and see the future, chances are that we would see our enemies of World War III as clear as day if we merely look around at the state of Eurasian affairs today.

According to ZeroHedge, the players in opposition to the United States and its allies are not difficult to figure out when one takes into account the Shanghai Cooperation Organization (SCO), a tightly run treaty group of six nations (currently).  Those nations, Russia, China, Kazakhstan, Kyrgyzstan, Tajikistan, and Uzbekistan make up the SCO with other nations waiting in the wings for full membership.

Formed in 1996, the original five nations (minus Uzbekistan) found it necessary to relieve tensions between their borders by a cooperative effort of treaties and trade.  With the addition of Uzbekistan in 2001, the leaders in the SCO noted that their organization now accounted for a quarter of the world’s population.

As relations between the United States and many Middle Eastern countries continued to deteriorate following ground forces in the region of Afghanistan and Iraq, the SCO began to formulate a plan to court other nations on the continents to join with them in an effort to balance the scales of power with NATO.

The SCO is divided into member nations (the above-mentioned six), acceding nations (those that are awaiting full membership), observer states (those not yet in application for full membership), dialogue partners (those being courted to join), and guest attendances (those who eventually seek to join, but are still unsure of their economic viability).

Frighteningly, if the SCO were to include only its member nations and the acceding nations (with the observer states tacked on) it would account for “half of humanity.”  This sobering fact makes the Shanghai Cooperative Organization a potentially dangerous and effective enemy for NATO and the West.

Even more frightening is the list of nations that are being considered to become full members of the SCO.  These include:  India, Pakistan, Afghanistan, Mongolia, Belarus, Iran, Armenia, Azerbaijan, Cambodia, Nepal, Sri Lanka, Turkey, Turkmenistan, Commonwealth of Independent States (CIS), Association of Southeast Asian Nations (ASEAN), Organization of Islamic Cooperation.

This array of nations also accounts for a full three-quarters of the Muslim population in the world.

Interestingly, the recent ramping up of military exercises on the part of the SCO has been under the auspices of combating “terrorism, extremism, and separatism” in the Muslim populations.

Read more about the growing threat from the SCO.