With Obama having completely opened up our southern border and allowing terrorists to enter, as confirmed by congressional reports, isn’t not to difficult to imagine that these preparations could be for our cities here at home.

Once hostilities commence, ‘domestic terrorists’ will be lumped in with jihadists and hunted down.

In 2013, Eric Holder declared a new task force for domestic terrorists, while a recent survey of local law enforcement revealed that  the ‘sovereign citizen’ is now considered the top domestic terror threat – even above Islamist extremists.

The problem from a military strategists’ point of view, however, is that no army has ever fought it out in a city of this size. So in thinking through the issue of what to do about the coming age of the megacity, the Army’s Capabilities Integration Center (ARCIC) got together with US Army Special Operations Command, the chief of staff’s Strategic Studies Group and the UK’s Ministry of Defence in February to explore these types of urban operations.

“There is no historical precedent” for these kinds of operations, Brig. Gen. Christopher McPadden, ARCIC’s director of concept development and learning directorate, said on Aug. 28. “We really have to figure out the scope and scale of the kind of operations we’ll have to participate in.”

But “it’s not about pouring brigade after brigade into a megacity; they’ll just get eaten up,” said Col. Kevin Felix, chief of the Future Warfare Division at ARCIC. While there will be many more than the current 24 megacities in the coming years, “there will be some that we care about and some that we don’t” depending on economic impact, distance and a range of local factors.

The United Nations estimates that such massive cities will increasingly become part of the worldwide landscape by 2030, when the current global urban population of 3.6 billion will likely hit about 5 billion — meaning that 60 percent of all humans will live in cities.

Looking at numbers such as those, Army Chief of Staff Gen. Ray Odierno’s Strategic Studies Group delivered a report to the chief in May claiming that “it is inevitable that at some point the United States Army will be asked to operate in a megacity and currently the Army is ill-prepared to do so.”

The team of Army officers and civilian academics continued that “the problems found in megacities (explosive growth rates, vast and growing income disparity and a security environment that is increasingly attractive to the politically dispossessed) are landpower problems. Solutions, therefore, will require boots on the ground.”

So in its annual Unified Quest war game, the Army gamed out a scenario in which it would put boots on the ground.

The Army team fought through what it envisions a battle in a massive city would look like around 2030. The impetus for U.S. action was a humanitarian disaster caused in part by the breaking of a dam, which broke down critical parts of the local state apparatus, while armed groups jumped into the fray to further destabilize the situation.

McMaster said one of the primary aims of the game was to generate ways to “extend the reach of the [infantry] squad so the squad can see and fight over a wider area” than it can now. That tracks with other Odierno initiatives in recent years to make infantry squads more lethal and more autonomous.

McMaster said that by 2030, the Army wants to provide infantry squads “access to aviation and air support and full-motion video, [along with] the ability to overwhelm the enemy during chance contact.” One of the key things is the firepower of the squad, particularly “shoulder-fired weapons capabilities, counter-defilade capabilities, as well as flying munitions and combined arms … mobile protected platforms capable of precision firepower.” 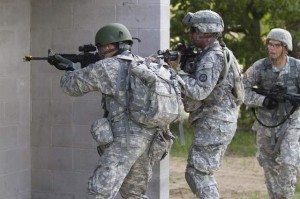