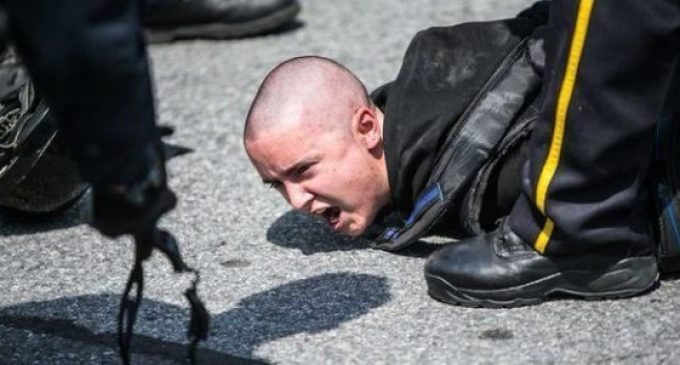 When the conservative group Act For America held a protest against Sharia law on June 10 in Harrisburg, Pennsylvania, counterprotesters led by Antifa thugs showed up to confront them.

As the Antifa group tried to move toward the ACT demonstration, mounted police moved in to help move the anarchist group back.

That’s when the unexpected happened: one of the Antifa thugs attacked a police horse with a flagpole having a nail driven through it.

This shocking display of animal cruelty led to the arrest of the Antifa hoodlum, who turned out to be a 23-year old woman with a shaved head.

Harrisburg police moved in quickly to arrest her, but she resisted them until she was wrestled to the ground.

Learn the disturbing details of the attack on the horse as witnessed by the Pennsylvania state trooper riding it, and the multiple charges that the woman will have to answer to in court on September 1. It all can be found on the next page.