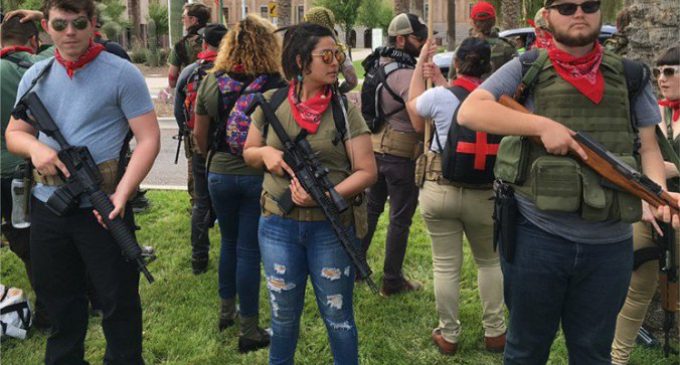 Anti-First Amendment groups like the hundreds financed by George Soros and other bigwig Leftists are cropping up everywhere for good reason.  The whole point of these groups is actually two-fold.

One of the reasons that these groups are in existence is, in fact, to expressly (By Any Means Necessary) shut down another American citizen's right to free speech.  These people who are ensconced in these groups are not the brilliant Rhodes scholars at the top of the Progressive food chain smoking cigars and barking orders to suppress the citizenry with extreme prejudice.  The toadies involved in these groups are the same know-nothings from the Occupy Wall Street protests.  They flail about with their signs and their kitschy slogans, all the while looking for any opportunity to locate the next donut shop for a quick “pee-break.”  These are social gatherings for the brain-dead masses who participate in them.

The second reason that these groups are in existence is to give the false impression that millions upon millions of “concerned” American citizens are so up-in-arms about what the Trump administration has done (either before they even do anything, or when they are only rumored to possibly be doing something) that they take to the streets in frustration and air their differences.

The issue with both of these reasons is that many (if not most) of these concerned citizens are being paid for their faux-outrage.  The reason that this is important is that it demonstrates why one should never look at these protests as significant (politically) as the ones which express support for the other side.  The children (and the adults whose mentalities completely fall in line with the children) who march in these fake protests know nothing more about the Constitution than they do about how their parents manage to pay for their tuition.

Their outrage is based on “training sessions” set up by Soros-inspired Alinsky-ites who pump their fist in anger at those who are Right wingers, all the while attempting to make these World of Warcraft-obsessed children comprehend the rudimentary ideas of radicalism and why it's important to the “cause.”

Anyone with a modicum of understanding about college-age students knows that the possibility of them actually listening to an adult (let alone understanding reasons behind the lecture) are virtually non-existent.

A new type of protester has now spawned from these proceedings because too many of the Alinsky-ite trainers realized that their bought-and-paid-for kids were just too wrapped up in Pokémon Go! to follow the Red Brick Road of Socialism.  Therefore, in an attempt to “show the young-uns” how to do it, they've created their own version of a Cloward and Piven properly trained protester, complete with new angle.

Behold!  The Phoenix John Brown Gun Club!  The new and improved far Left protester who couples both the understanding of riot-principle and the use of fake firearms!