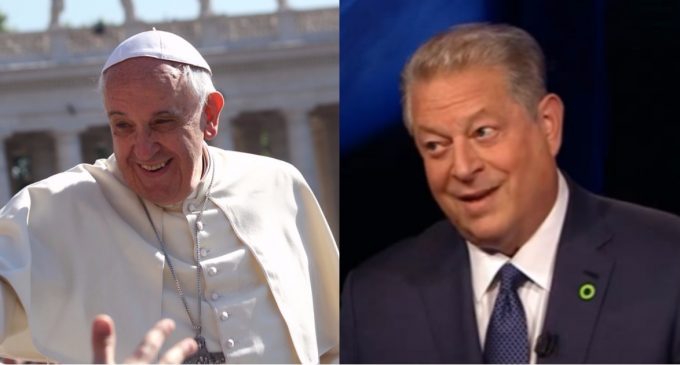 Former Vice President Al Gore is starting to turn his back on his Southern Baptist roots. Seems they are too much like those ideological Christians Pope Francis claims is destroying the church. It seems that old school Christianity has no place in the New World Order.

And both Al Gore and Pope Francis think the world is going to end. These religiously minded men aren’t thinking of the end times as foretold in the Bible. Or are they? Pope Francis and Al Gore think a “one world government or power” is necessary for the world to avoid unprecedented destruction.

The recent interview Al Gore gave on CNN with Anderson Cooper alongside Glenmary Priest John S. Rausch shed a lot of light on why Al Gore loves Pope Francis so much and why loving Jesus means loving global warming initiatives. How does that make sense? Just hear Al Gore and Rausch explain on behalf of Pope Francis on the next page why “climate crisis is a crisis in spirituality”.

And you’ll never guess the excuse these guys give for why flying private jets isn’t hurting the environment!