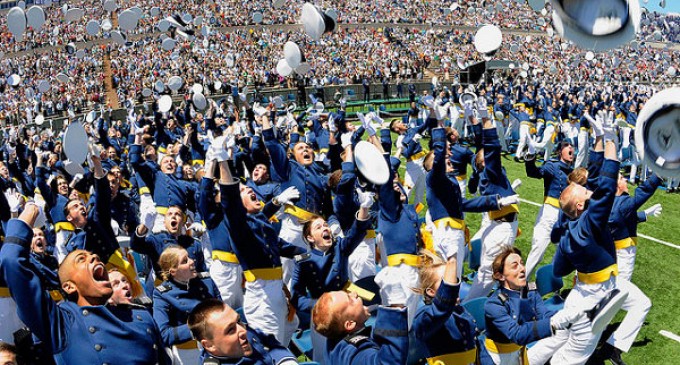 Under pressure from “The Military Religious Freedom Foundation”, the Air Force has changed the Cadet Honor Oath.

Text of the current Oath:

“We will not lie, steal or cheat, nor tolerate among us anyone who does. Furthermore, I resolve to do my duty and to live honorably, so help me God.”

“Here at the Academy, we work to build a culture of dignity and respect, and that respect includes the ability of our cadets, Airmen and civilian Airmen to freely practice and exercise their religious preference – or not.” Lt. Gen. Michelle D. Johnson, Academy Superintendent, told Fox News. “So, in the spirit of respect, cadets may or may not choose to finish the Honor Oath with ‘So help me God.’”

Michael Weinstein, founder of the Military Religious Freedom Foundation, characterizes evangelical Christians in the military as “incredibly well-funded gangs of fundamentalist Christian monsters who terrorize their fellow Americans by forcing their weaponized and twisted version of Christianity upon their helpless subordinates in our nation’s armed forces.”

Does this approach sound like a reasonable reaction to this special interest group's demands, or could it be related to other anti-Christian pressure on the miliatry, seen lately?