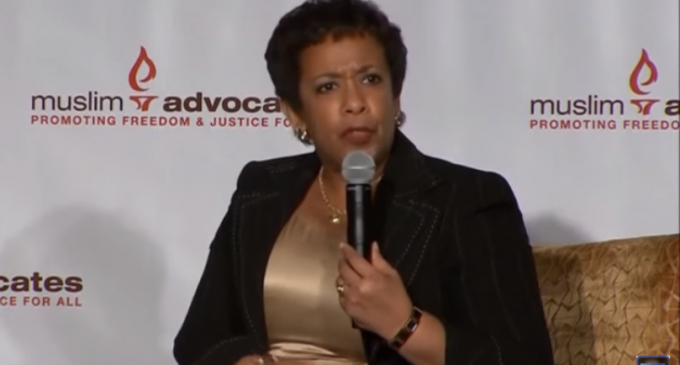 Loretta Lynch, siding with the Muslim community, promises to prosecute “anti-Muslim rhetoric” that “edges towards violence”.   Lynch made these astonishing statements at the 10th anniversary dinner for the  Muslim Advocates, promising to protect and prosecute, on behalf of the Muslim community, while quashing the speech Americans' who have legitimate concerns about Islam.

Unbelievably, she is capitalizing on the deaths of 14 innocent lives and 21 wounded that occured at the San Bernardino terrorist massacre as a “wonderful moment to really make a significant change.”  The audacity to use a time of mourning and grief to make these insulting remarks is incomprehensible.  Lynch stated, “We’re at the point where these issues have come together really like never before in law enforcement thought and in our nation’s history and it gives us a wonderful opportunity and a wonderful moment to really make significant change.”

Read more on page two about how Lynch claims she fears rhetoric that causes acts of violence and yet her own social justice rhetoric is creating a rift in America.