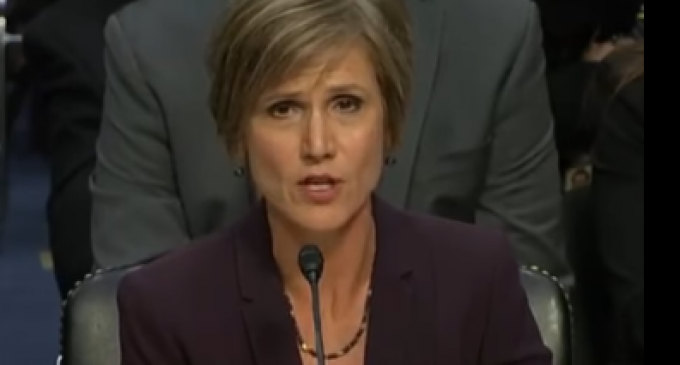 There appears to be one thing that all Leftists have in common and that is, they lie…and they lie often.  Sally Yates is a perfect example of this.  She is a polished, affable-appearing woman who is the former Acting Attorney General after Loretta Lynch tendered her resignation.

Yates made headlines last month when she actively and publicly defied President Trump's executive order to ban immigration from countries that had been prone to producing terrorists.  Somehow, along the way, Yates got mixed up in the politics of the affair, instead of ruling on the legal aspect of the order, and applied her “feelings” rather than facts.

The Office of Legal Counsel is a body within the Department of Justice that reads briefs or documents which are being prepared for implementation.  The work of this body is a matter of interpreting whether or not the order in question is up to legal standards and will not be challenged or has no basis for successful challenge in a court of law.  The work is typically done on behalf of lawmakers and, in particular, the president.  The Attorney General (or in this case, acting AG) normally defers to the determination by the Office of Legal Counsel because of this exhaustive work as a courtesy to both the Office and the Commander-in-Chief.

Sally Yates took this determination by the Office of Legal Counsel and made the decision that they were not only wrong, but that they didn't apparently know what they were talking about.  The legal experts in the Office of Legal Counsel were not asked to appear at this hearing in Congress, but one wonders what would have been said by its witnesses.

This is the equivalent of a League of Surgeons determining that a medical procedure is absolutely necessary and will be safe and beneficial to the patient.  Then one, lone doctor disagrees with the League and refuses to perform the surgery.  It is an egregious breach of protocol and one that led to the acting Attorney General's dismissal (one for which, of course, she is lauded by the Left).

Yates' arguments were transparent lies because she had contradicted herself on several occasions during the hearing process.  Of particular interest is her exchange with Senator John Cornyn (R-TX) who questioned her extensively about her defiance of the president's executive order.