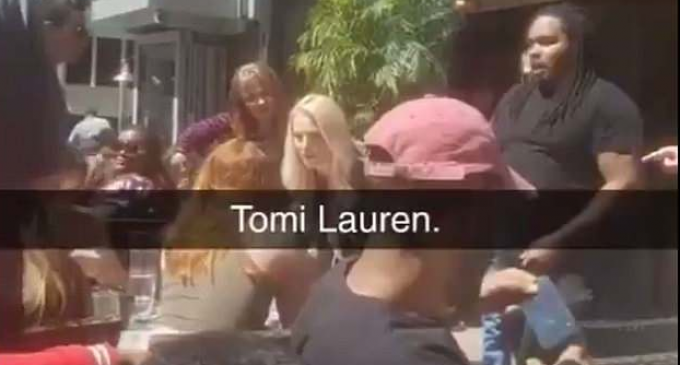 Fox News contributor Tomi Lahren was out for brunch at a rooftop restaurant in Minneapolis on Saturday with her mother when a patron hurled water at the 25-year-old. Lahren confronted the patron while other diners can be heard on the video expressing their support for the woman who threw the water. One repeatedly shouted, “f*ck that b*tch.”

Bouncer Jeremy Jackson says he stepped in to break-up the altercation: “I said [to Tomi] ‘I’d like to separate you all if can please –’ and she responded, ‘You’re just going to kick me out for them throwing water? Unbelievable.'”

Tomi and her mother chose to leave the restaurant after the altercation. Jackson removed the water thrower from the venue.

“Unfortunately, there was a group of people probably around my age that thought it would be funny to throw water at me and then start chanting profanity and, again, not something that I’m not used to but really disheartening,” Lahren said on Fox & Friends.

Move to the next page for videos as well as President Trump's response: