Deeply unsettled by what she was seeing, Haluska began asking what exactly they were doing. Instead of acknowledging that passengers like her had not consented to any such treatment, the plane staff simply had her removed for causing a “disturbance”. How curious it is that whenever somebody tries to stand up for their rights they are accused of causing a “disturbance”.

However, what Haluska did manage to do was catch them spraying the plane on tape!

As it turns out, Haluska and her co-passengers were being subjected to spraying because the airline feared that some of them could be carrying a bug and wanted to disinfect them, exposing them to potentially dangerous insecticides in the process. As if that weren’t chilling enough, it appears that Haluska’s flight isn’t the only one being given the “bug spray” treatment:

‘This process is being referred to as ‘disinsection,’ a word that seems to have been made up by the TSA or airline industry. Disinsection, or the spraying of an insecticide or pesticides on planes, is now permitted under international law. The Department of Transportation says that the supposed intent is to protect public health, crops and agriculture, and the environment.’

HUH? First of all how and second- WHAT THE ACTUAL HELL?

More from the article:

‘The International Civil Aviation Organization and World Health Organization (WHO) admit that aircraft cabins are being sprayed with what they are calling a ‘fast-acting insecticide’ with passengers on board, right before takeoff.  Some airlines are instead treating aircraft interiors with a ‘residual-insecticide aerosol’ right before passengers get on board.’

The chemicals are also being applied to the aircraft’s internal surfaces as well which means that if they aren’t spraying, you and I are still breathing this stuff in. Or ingesting it.

Since the spraying began, passengers have reported flu-like symptoms, sinus issues, rash/hives, headaches, and swollen joints- and that’s just some of what’s been reported; far more serious issues like acute respiratory problems and anaphylactic shock have also occurred. But don’t worry, the WHO says there is no evidence that spraying insecticide in enclosed spaces, onto people, is dangerous.” 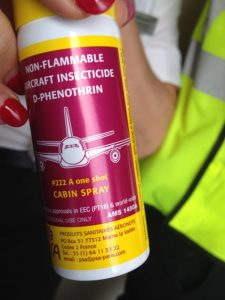