A woman in Florida was arrested for flinging peanut butter at her brother over an argument about their dog urinating in the living room. When the deputy was dispatched to their home he found the brother with peanut butter running down his face. Despite the brother declining to press charges, his sister was taken to the county jail on battery charges.

This is an example of the rampant police over stepping of authority. Flinging peanut butter at someone does not constitute battery, and it’s absurd to assume that it does. The fact that someone was arrested over something so trivial shows how power-hungry the modern police force is.

Police in Florida said they arrested a woman accused of flinging peanut butter at her brother during an argument about a urinating dog.

The Volusia County Sheriff’s Office said Rachel Byrd, 29, of Deltona, was arrested Monday on battery charges after allegedly flinging a spoonful of peanut butter at her brother during an argument about a dog urinating in the living room of the house the siblings share, WKMG-TV, Orlando, Fla., reported Wednesday.

Someone called 911 during the incident, but hung up without speaking, the sheriff’s office said. The dispatcher sent a deputy to the home and discovered the brother had peanut butter running down his face.

The man said he did not want to press charges, but the deputy determined Byrd was the aggressor in the confrontation and she was taken to the Volusia County Branch Jail on battery charges. 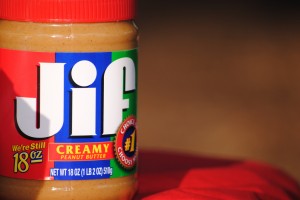