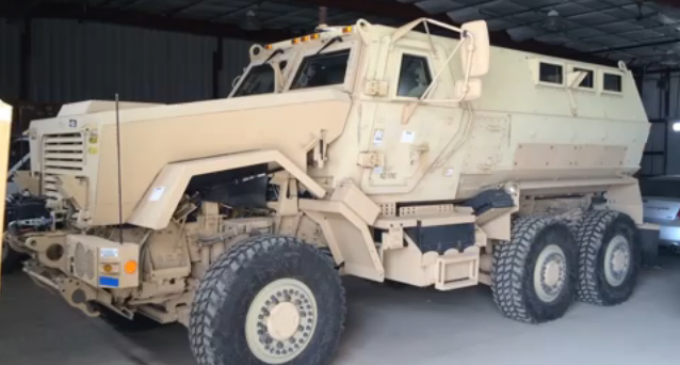 Neenah is just one city in Wisconsin where police have recently obtained or will acquire free, mine-resistant Caiman multi-terrain vehicles through an excess property program at the U.S. Department of Defense.

To calm concerns from residents about weapons from the army being brought into their town, the video below was released explaining that the trucks would be used in incidents like hostage situations.

Neenah’s SWAT team leader, Lt. Jeff Malcore, stated the vehicle’s gun turret has been removed and that the truck doesn’t have other weapons on it.

“We have no ability to shoot out of it,” Malcore said. “All it does is allow us to get from one place to another so we can deploy our people, or if there’s firing coming in, we can back up to a window or something to get people out.”

He didn't explore the possibility that the gun turret could be put back on the truck or that police could bring weapons into the vehicle with which to shoot out of that big hole in the top, of course.

The militarization of our police force at a local level, paramilitary forces in 48 federal agencies, war machines being brought into our cities all over the country and the efforts to disarm the American people…no, your little promo video about how this vehicles only purpose to move people from one place to another doesn't make me feel any better, sheriff.