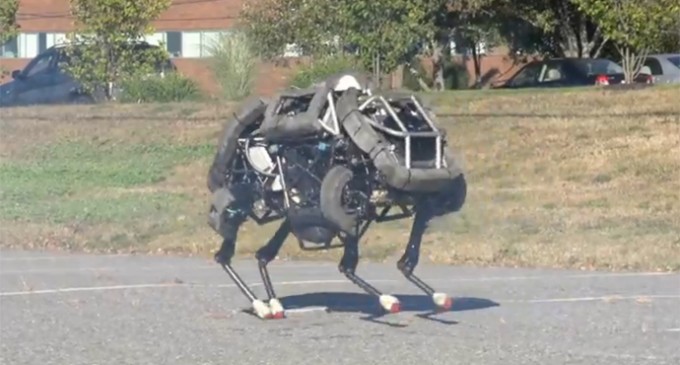 With the talk of drones filling our skies and DHS arming to the teeth in what seems like a preparation for massive civil unrest, one has to wonder what other things the government has in mind to ‘control' the populace.

Perhaps these 4-legged creatures, called WildCat, is on the list. Funding comes from Defense Advanced Research Projects Agency, or DARPA.

Developers at Boston Dynamics, an engineering company specializing in robotics, have released video of an untethered robot capable of standing and mobilizing on its own.

WildCat is a four-legged outdoor runner capable of rising, turning, and reaching running speeds up to 16 mph on flat ground. WildCat is a close cousin to Boston Dynamics’ Cheetah, another quadrupedal robot that was unveiled a year ago, running at speeds over 28 mph on a treadmill – quicker than world’s fastest man Usain Bolt's top speed of 27.78 mph.

However, unlike WildCat, Cheetah was connected to a power source. The runner carries a large – and very loud – motor to operate its four limbs, though the weight hampers its speed and agility. Boston Dynamics has not detailed what is next for WildCat, but it is known to have been developed for military use, as the project is part of the Maximum Mobility and Manipulation Program funded by the Defense Advanced Research Projects Agency, or DARPA.