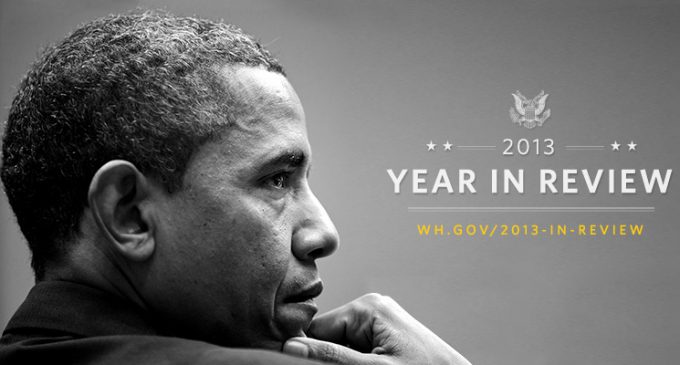 The White House has once again mis-characterized actual events in the hopes that Americans will ignore what they’ve been seeing all year and listen to some up-beat end-of-year propaganda. While Americans are genuinely concerned about a long list of problems affecting the country:

— the falling polls, the government surveillance controversy, the shaky rollout of the health care plan — the White House year-end review package posted on its website accentuates the positive.

“In 2013, our economy grew, and our deficit shrunk,” the promo says. “For the first time in almost two decades, we said that we’re producing more oil at home than we buy from the rest of the world.” The post takes a month-by-month look at (some of) Obama’s activities from 2013, illustrated with photos, charts and videos.

The promo says, “We honored our heroes. We bounced back from national tragedies and natural disasters. We strengthened our relationships with allies around the world and took action to promote the American dream at home. Take a look at our 2013 year in review.”