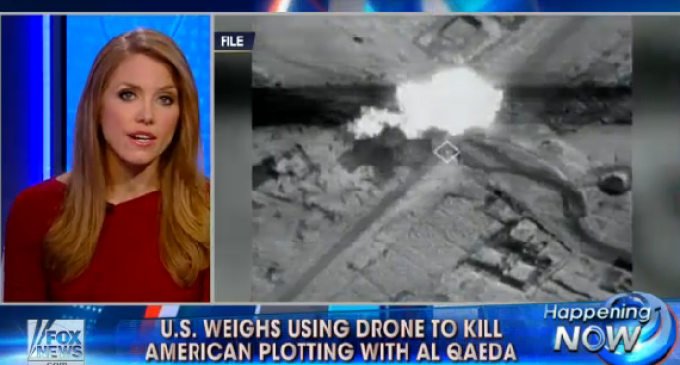 Killing American citizens is about to get a whole lot easier for the White House after it debates, and decided to kill an American living overseas with a drone that it claims is working with Al Qaeda.

The military already has authority to kill an American living abroad, now the White House is vying to get the CIA and its drones in on the action.

Make no mistake, one day it will be the killing of an American abroad because he's working with Al Qaeda, next it will be a staunch conservative with something ‘threatening' on his computer the NSA spying discovers that gets him pegged as a ‘terrorist'.

You rights are protected through legal lines that have been set up long ago by our Founding Fathers, now those lines are being moved continuously and one day there will be nothing left to protect you.

“People willing to trade their freedom for temporary security deserve neither and will lose both.” — Benjamin Franklin

The Obama administration is debating whether to use a drone strike to try to kill an American citizen who is a member of Al Qaeda and is actively plotting against the U.S., and how it could do so legally, senior U.S. officials confirm to Fox News.

A senior official who has been involved in the discussion for the past six months said the debate involves the Justice Department, State Department, Department of Defense, the CIA and the White House, and there have been “elaborate, multiple legal reviews” on the subject.

According to the official, the discussions are seeking to “weigh the purest legal reasoning with the needs of the nation.” The Department of Defense and others are also considering the legal precedent this case would set in light of strict concerns about the Constitution.

The target was not named, but had a relationship with American cleric Anwar al-Awlaki when he was living in the US before 2003.

“We are extremely concerned about this individual,” the official told Fox News. “He’s a really bad guy.”

The administration is trying to decide whether the drone strike is necessary, and how to do so legally under its new stricter targeting policy issued last year. The CIA drones watching the target cannot strike because he's a U.S. citizen and the Justice Department must build a case against him, a task it hasn't completed.

One U.S. official told the Associated Press the Defense Department was divided over whether the man is dangerous enough to merit the potential domestic fallout of killing an American without charging him with a crime or trying him, and the potential international fallout of such an operation in a country that has been resistant to U.S. action.

The officials said the suspected terrorist is well-guarded and in a fairly remote location, so any unilateral attempt by U.S. troops to capture him would be risky and even more politically explosive than a U.S. missile strike.

Under new guidelines Obama addressed in a speech last year to calm anger overseas at the extent of the U.S. drone campaign, lethal force must only be used “to prevent or stop attacks against U.S. persons, and even then, only when capture is not feasible and no other reasonable alternatives exist to address the threat effectively.” The target must also pose “a continuing, imminent threat to U.S. persons” — the legal definition of catching someone in the act of plotting a lethal attack.

House Intelligence committee chairman Mike Rogers, R-Mich., complained last week that a number of terrorist suspects were all but out of reach under the administration's new rules that limit drone strikes based on the target's nationality or location.

A senior administration official said that the Justice Department was working to build a case for the president to review and decide the man's fate. The official said, however, the legal procedure being followed is the same as when the U.S. killed militant cleric and former Virginia resident al-Awlaki by drone in Yemen in 2011, long before the new targeted killing policy took effect.

The official said the president could make an exception to his policy and authorize the CIA to strike on a onetime basis or authorize the Pentagon to act despite the possible objections of the country in question.

If the target is an American citizen, the Justice Department is required to show that killing the person through military action is “legal and constitutional”– in this case, that the Pentagon can take action against the American, as the administration has ruled him an enemy combatant under the Authorization for Use of Military Force, a resolution Congress passed a week after the 9/11 attacks to target Al Qaeda.

Mary Ellen O'Connell, a professor of international law at the University of Notre Dame, said there is a school of thought that the Obama administration's drone policy is “lawless.”

“Why should the Justice Department issue the execution warrant for anyone abroad? The fact that they give extra scrutiny only because he's an American exacerbates this negative impression,” O'Connell said.

U.S. drones have killed four Americans since 2009, including al-Awlaki, who the administration said was actively plotting to kill U.S. citizens.

The case has galvanized congressional opponents of Obama's plan to transfer drones from the CIA to the Defense Department. Before the plan was announced, either CIA or Pentagon drones could go after terrorist targets, even if they were U.S. citizens. The CIA could also fly drones in areas where host countries might object. But by law, the Pentagon can only strike in war zones, in countries that agree to U.S. counterterrorism action or in lawless areas like parts of Somalia where that government's security forces cannot reach. Even then only al-Qaida-linked suspects can be targeted.

“It is very clear that there have been missed opportunities that I believe increase the risk of the lives of our soldiers and for disrupting operations underway,” Rogers said last week.

U.S. officials said both Senate and House appropriators have blocked funding to transfer the CIA's stealth RQ-170 drone fleet to the Pentagon. Some lawmakers want the White House to come up with a fix for targeting suspects in areas where the Pentagon is banned from operating — either by leaving some part of the CIA operation running or by granting the Pentagon authority to strike covertly despite the location — meaning they could legally deny the operation.