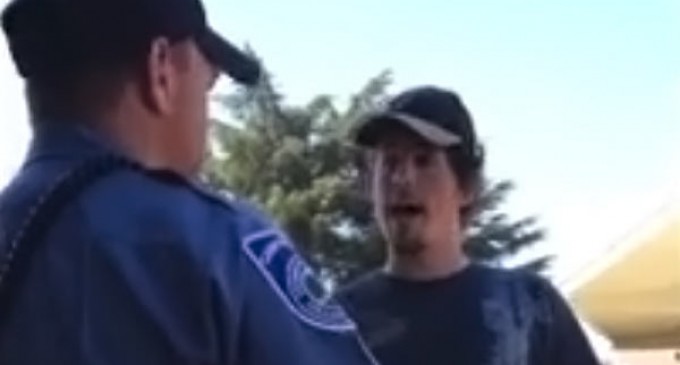 Van Tuinen was informed that he was permitted to relocate in the college’s “free speech zone” — but he would have to schedule his act of free speech ahead of time.

The Foundation for Individual Rights in Education (FIRE) sent a letter to Modesto Junior College asking the school to stop the policy of limiting free speech on campus. FIRE indicates their research shows similar rules at many other American colleges.

In fact, one in six of America’s 400 largest and most prestigious colleges have ‘free speech zones’ limiting where speech can take place.

What is the College afraid of? Why do they seek to control free speech?

Perhaps we have only to look at the behavior of staff at our colleges to see what worries college administrators.  On Monday after the Navy Yard shooting in Washington, D.C., a journalism professor at the University of Kansas tweeted strident wishes that the next mass-shooting target the families of the National Rifle Association (NRA).

“The blood is on the hands of the #NRA,” David Guth, an associate professor of journalism at the university’s William Allen White School of Journalism, tweeted. “Next time, let it be YOUR sons and daughters. Shame on you. May God damn you.”

Source: What This California College Wouldn’t Let a Student Do on ‘Constitution Day’ May Make Your Blood Boil
Source: PROFESSOR SEEMINGLY WISHES NEXT MASS SHOOTING ON NRA FAMILIES
Photo: YouTube