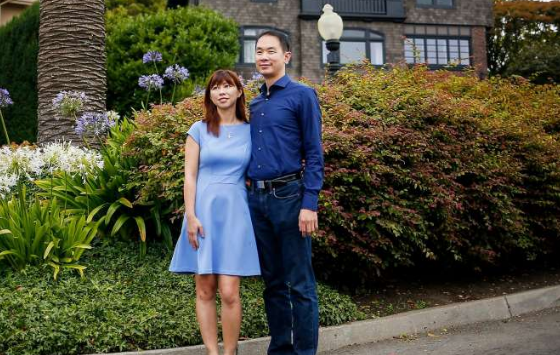 Not just anyone can drive into Presidio Terrace. There is a guard around the clock at the stone-gated entrance off Arguello Boulevard. But ironically, virtually anyone paying attention could have purchased the street at auction.

Tina Lam and Michael Cheng aren’t just anyone, however. They are savvy young investors on the lookout for properties in San Francisco.

Since 1905, a homeowners association has maintained Presidio Terrace, including the street sidewalks and “common ground” that includes garden islands, palm trees and other greenery. Now the married couple has to decide what to do with it.

Two years ago, the city’s tax office decided to put the property up for auction to recover $994 in unpaid taxes, penalties and interest. The annual amount due was $14 and it hadn’t been paid since at least the 1980s.

The homeowners association is up in arms and asking the city Board of Supervisors to negate the sale, which occurred back in 2015. A hearing has been scheduled for October.

In a letter to the city last month, Scott Emblidge, the attorney for the Presidio Homeowners Association, said the group had failed to pay up because its tax bill was being mailed to the Kearny Street address used by an accountant who hadn’t worked for the homeowners since the 1980s.”

Since the purchase, the couple has been quietly sitting on the property while exploring options with land-use attorneys.

We were looking to get title insurance so it could be marketable,” Cheng said.”

Cheng noted one option is to charge residents for parking on the street in the 120 spaces the new owners now control. Residents are outraged by that prospect.

In addition, the homeowners association has sued the couple and the city, seeking to block Cheng and Lam from selling the street to anyone while the city appeal is pending — a move residents fear could complicate their efforts to reclaim the land.”

Residents maintain that the city tax office had an obligation to post notices in Presidio Terrace about the auction and that they should have received individual notices.

The office of Treasurer-Tax Collector Jose Cisneros claims it did what was required by law.

Ninety-nine percent of property owners in San Francisco know what they need to do, and they pay their taxes on time — and they keep their mailing address up to date,” said spokeswoman Amanda Fried. “There is nothing that our office can do about the sale now.”

Fried said to her knowledge, the Board of Supervisors “has never done a hearing of rescission.” Because it’s been more than two years since Cheng and Lam bought the property, chances of the sale being overturned are likely not good.

The investing couple indicates it’s in no hurry to sell the property or implement other options. Lam is an engineer in Silicon Valley, who was born in Hong Kong and came to America for college. Her husband was born in Taiwan.

I’m a first-generation immigrant, and the first time I came to San Francisco I fell in love with the city. I really just wanted to own something in San Francisco because of my affinity for the city,” Lam said.

An interesting sidelight to the story is that until a 1948 U.S. Supreme Court ruling banning the enforcement of racial covenants, only whites could purchase homes in Presidio Terrace.