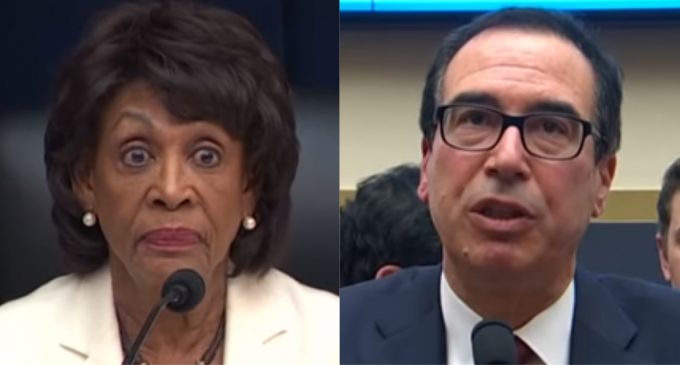 Rep. Maxine Waters and Treasury Secretary Steven Mnuchin got into a fiery exchange on Tuesday at the end of a three-and-half-hour testimony before the House Appropriations Committee and Financial Services Committee. After Mnuchin reminded the committee of his prior agreement to leave by 5 p.m. for a meeting with an international dignitary, Waters thundered at Mncuhin to, in essence, to sit down – her highness had not yet dismissed him.

“I don't mean to be disrespectful, but we had an agreement that I was going to leave here at 5:00,” Mnuchin told the committee.

“I have a very significant bilat, it would be embarrassing,” Mnuchin said. “Now I will tell you, in the last six years there has never been a secretary of Treasury who sat for more than three hours and 15 minutes. So, I, as a courtesy, am happy to stay till 5:15.”

“But it would be very embarrassing to a foreign government if this committee expected me to not show up for that meeting,” he said.

The attempt to leave on his own volition drew great ire from Waters, who then attempted to frame him into some sort of aberrant behavior.

Turn the page to continue.