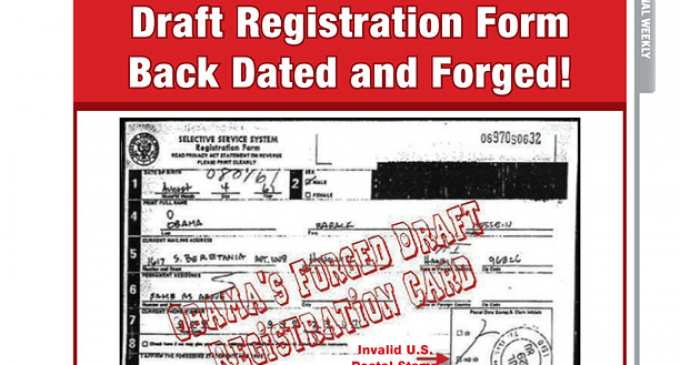 Let's put this one in our Awesome Citizens file.

Charles Kerchner, a private citizen, took out a full-page ad in the Washington Times on Dec 9th calling for action on Obama's fake selective service form and fake birth certificate.

The ad also calls out House Speaker John Boehner, claiming he's been presented with evidence proving the forgeries from a full 2-year investigation by Sheriff Arpaio's office in Arizona, but he's done nothing.

The story isn’t that someone discovered that B. Hussein Obama is using forged documents to support a false identity as an American citizen able to hold the office of president. Many of us have seen the proof and for most of us it is compelling enough to at least warrant a legitimate and unbiased Congressional investigation.

The newsworthy item is that someone else has joined the public push for answers and action in a big way.

Charles Kerchner, a private citizen, reportedly took out a full-page ad in the Washington Times, which appeared on page 5 on Monday. He is attempting to force a discussion regarding the use of forged documents by B. Hussein Obama, specifically; his back dated and forged selective service form.

A lot of evidence has been presented on the selective service form by the cold posse of Sheriff Joe Arpaio. They did extensive forensic work and involved a variety of experts to examine it, among the many questionable items in the Hussein Obama history.

But a full-page ad detailing the possible criminality of the White House occupant was only the beginning. He also took out another ad, blasting House Speaker John Boehner of Ohio. Boehner, whom he coupled with Oklahoma Rep. Markwayne Mullin saying he believes Hussein Obama’s birth certificate is fraudulent, but he doesn’t “give a sh*t.”