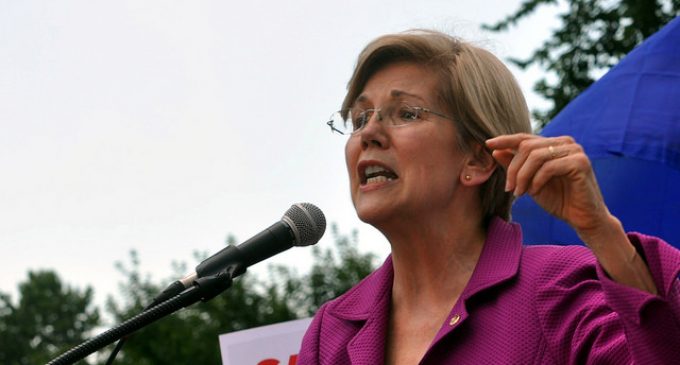 Warren makes the argument that not letting people come over our border with no papers whatsoever ‘doesn’t make people safer.’ Warren is obviously speaking only of illegal immigrants as it has been the assertion of many that our nation is under great threat not only from illegal immigrants who commit crimes, but from Mexican gangs and cartel members that engage in drug and human trafficking within our borders.

Recent U.S. Customs and Border Protection data revealed that two caravans that arrived at the U.S.-Mexico border, in October 2018 and January 2019, included “1,520 previously deported illegal aliens who had been convicted of crimes in the U.S.,” Breitbart News reported.

That data only reflects the illegal aliens from those two caravans alone.

There are countless stories of illegal alien crime, although many of the stories are largely ignored by the establishment media.

In January, U.S. Immigration and Customs Enforcement (ICE) arrested more than 100 immigration violators in New York. The vast majority of the illegal aliens were convicted criminals.

U.S. Immigration and Customs Enforcement (ICE) Enforcement and Removal Operations (ERO) made 188 arrests from January 14-18. Of those arrested, 107 were convicted criminals or facing charges, and 55 failed to leave the country after a final order of removal or were previously removed and returned to the U.S.

The following month, a story emerged of an illegal alien mother of nine, Celia Ruiz-Ochoa, who ran a massive drug trafficking ring after settling in the states and passed it down to her son in 2016. She is serving 17 years in federal prison:

Federal authorities say Ruiz-Ochoa often trafficked the drugs into the U.S. by air and by land. She was so successful that she rose to the top of an international drug trafficking ring which contributed to the opioid crisis in Ohio, WCPO reported Thursday.

Additionally, the majority of working-class Americans say current immigration policies are driving up crime in the U.S.

It is rather difficult to grasp why these leftists continue to move left on this issue. Donald Trump was obviously elected in great part because of his promise to build a wall and straighten out our broken immigration system. Their positions will only serve to help bring about the one event they obviously do not want: the reelection of Donald Trump.