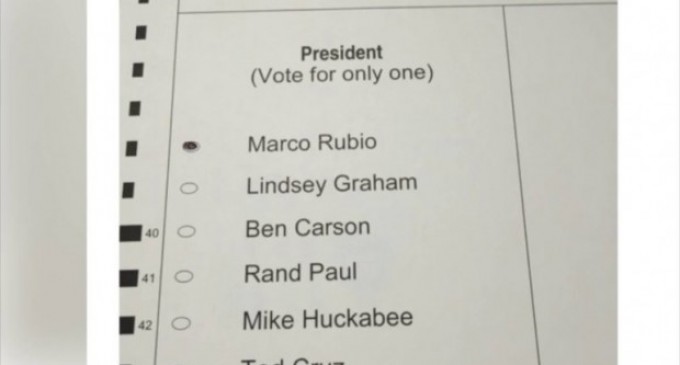 It appears somebody is attempting to rig the GOP primaries, and from the looks of it, they’re rooting for Marco Rubio.

At least, that’s what one would reasonably conclude after dozens of reports across the country of voters receiving ballots already marked in favor of the senator from Florida. While mistakes are obviously going to be made in the process of distributing millions of ballots, the fact that the same mistake has been made repeatedly and in multiple locations suggest something darker is at work.

The latest incident of this nature took place in Virginia, where a voter taking part in the Tuesday primary was shocked to see the ballot he obtained had already been filled out for Rubio. He took a picture of the defaced ballot and informed the media about it.

Despite the concerns relayed to him by reporters about the affair, Richmond general registrar Kirk Showalter brushed them off, nonchalantly saying “there [is] no reason for voters to be alarmed.” Yeah, don’t worry folks, it’s just voter fraud, nothing to see here!