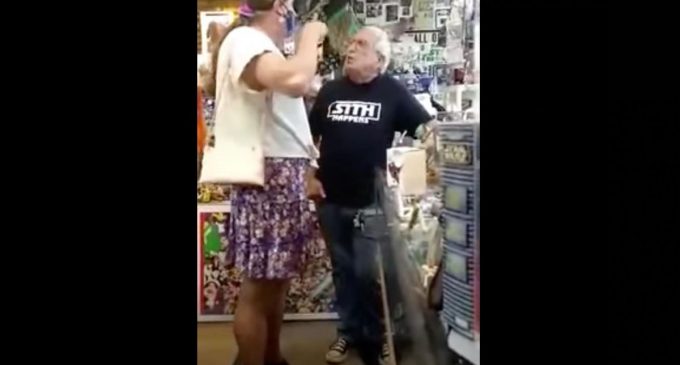 A video of a confrontation that took place on Wednesday between a business owner and a transgender person who demanded he take down a sign in front of his story has gone quite viral. The owner of a Washington Star Wars shop, a veteran, defended his sign that reads “If you are born with a dick, you are not a chick.”

“Everybody loves it,” Sucher & Sons Star Wars Shop owner Don Sucher is seen telling city council member Tiesa Meskis in the video. “They take pictures of it. They post it. 9/10 customers love it.”

“No, what you’re spouting is bullshit,” Sucher retorts, to which the transgender council member responds, “No it’s not. Trans women are women, sir, that sign is bullshit.”

“Nobody confronts your a** because you know what, they’re afraid they’re going to hurt your feelings,” the store owner said. “Do you know how many people you have embarrassed at city hall?” he continued. “You’re nuts. You’re not a woman. You don’t look like a woman, you don’t act like a woman … You are an ***hole.”

“Do you think there is one person that really thinks you are a chick? … Nobody confronts you, that’s the problem,” the owner said.

"If you are born with a dick, you are not a chick"

An elderly business owner in Aberdeen, WA was confronted by trans councilwoman Tiesa Meskis (@valasule) over a sign she found offensive. She & an antifa group have announced a direct action outside the shop on 7 Aug at 10 am. pic.twitter.com/2Ukbjs2jAN