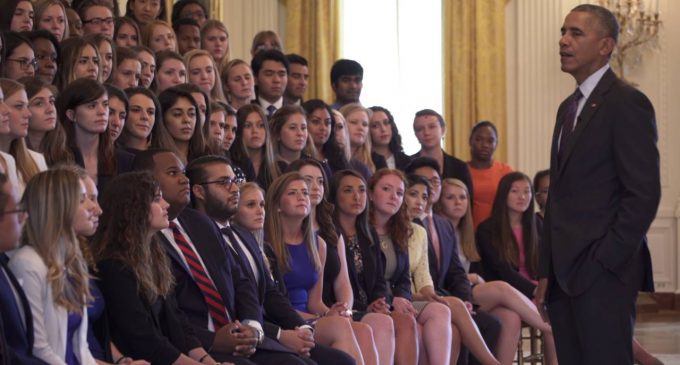 This week,  interns on capital hill got the chance have a Q&A session with president Barack Obama. The young (and not-so-young) interns took the opportunity to ask the president their most pressing questions. Questions like “talk about how you can remain so optimistic” and “how do you know when to compromise?” It wasn't exactly hard-hitting stuff.

Still, Obama's interns seemed to hang on the president's every word, at one point giggling over nearly every sentence fragment that came out of the commander in chief's mouth. How the phrase “splashing in waves” elicits such widespread laughter is anyone's guess, but it's likely a product of the cult of personality surround Obama among young people.

While this idolization of the president may not be their biggest mistake — that might be pursuing a career in politics — it does seem to suggest that the intern program at the White House is little more than a taxpayer-funded Obama fan club.

Obama's answers during the event don't seem to do much to push their education, either.

Watch Mr. Obama call Mrs. Obama “the bomb” while talking to our country's supposed future legislators on the next page: