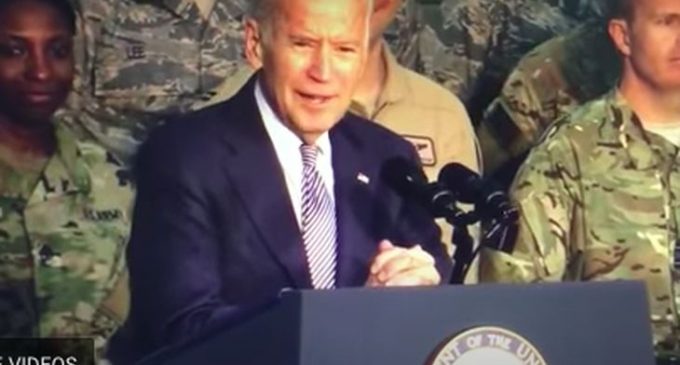 Video has surfaced of former Vice President Joe Biden jokingly calling US military members “stupid bastards” and a “dull bunch” apparently in indignation for not receiving applause during a 2016 trip to the United Arab Emirates. Biden said we don't need to trust anonymous sources in the Atlantic to believe these labels to believe them.

“Notwithstanding what you may hear about me, I have incredibly good judgment,” Biden said. “One, I married Jill and two, I appointed Johnson to the academy.”

When nobody reacts, Biden added “I just want you to know that, so clap for that you stupid bastards.” Biden then proceeded by saying, “Man, you all are a dull bunch. It must be slow here, man.”

Biden, who was in his final year in office, traveled to the Middle East in March 2016 as part of an effort to shore up the Obama administration’s position in the region. During the trip Biden delivered an address to members of the 380th Air Expeditionary Wing stationed at the Al-Dhafra Air Base near Abu Dhabi, the capital of the United Arab Emirates.

As part of the visit, Biden was introduced by 1st Lt. Karen Johnson of the 380th’s Expeditionary Aircraft Maintenance Squadron. Given that Lt. Johnson was a native of Delaware and had secured her appointment to the U.S. Air Force Academy through Biden’s former Senate office, the vice president tried to use that history as a means to break the ice with the more than 1,000 service members present.

While it might be anticipated that President Trump will level Biden in the debates, he might not get the opportunity if Biden takes himself out first.

Wow. Democrat Presidential candidate Joe Biden called our troops "stupid bastards" in 2016. How did this video stay hidden for so long? There’s only one stupid bastard in this clip and it’s definitely not any of our troops… pic.twitter.com/YZ99utMx30