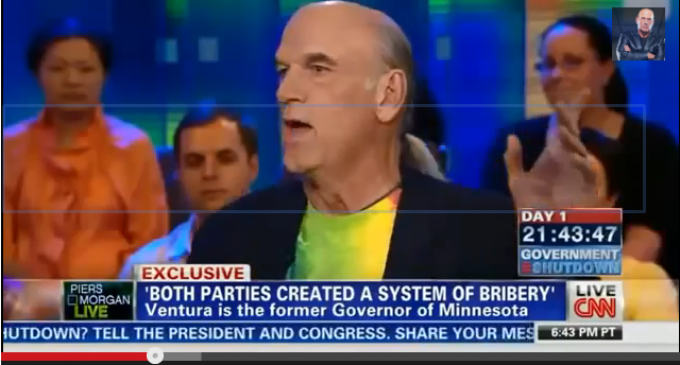 Definitely time for a revolution!

My question is…a gang of what?

The irony of Jesse Ventura calling for a new “American Revolution” in a conversation with Brit Piers Morgan is not lost on us but the former Governor of Minnesota asks some awkwardly open questions in this ‘colorful' interview. Ventura asked if the government's shut down, “That should mean we shouldn't have to pay any taxes, right?” He called for another American revolution to push back against the “corrupt system” created by Democrats and Republicans in Washington. He told Morgan the two-party system has legalized “bribery” for access, suggesting he's fed up enough to actually run for president in 2016. Ventura called both parties “gangs,” and Morgan admitted he had to agree, adding that they're “overpaid, underworked children!” The discussion then veers from Obamacare, Ventura's run for President, and the JFK conspiracy.