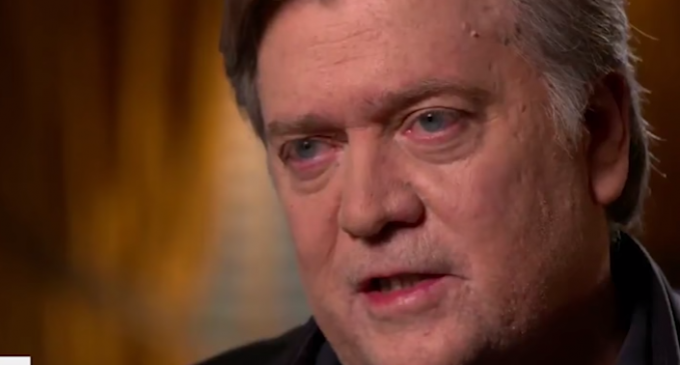 Bannon destroyed old school globalist shrill Charlie Ross on 60 Minutes. But, thanks to the Fake News Industrial Complex’s usual debauchery, none of the liberal sheep fired up enough brain cells to pay attention to the words coming out of Bannon’s mouth.

It’s all about what’s perceived to be on the outside to these ‘woke’ liberal economic nationalism hating progressives.

“It almost looks like someone drew a mouth and eyes on a hemorrhoid.”

“He should wear a tin foil hat to cover his whole face then maybe people will be able to pay attention to his incoherent drunken rambling.”

“Is anyone else creeped out by Bannon’s neck? Looks like the gerbil he shoved up his while drunk is trying to claw it’s way out the side of his neck.”

“Did somebody fart on your pillow? Why does it always look like you got pink eye man?”

These comments aren't very tolerant and the reason for this is Bannon gave the Trump hating regressive progressives little to no ammunition. He was a gentleman and intelligently defended his perspectives and the President’s agenda while denouncing the false white supremacy allegations.

CBS knew they were in big trouble when they saw the unedited recorded interview with Bannon. So, instead of pulling the interview and face embarrassment. They decided to rely on the shallowness and stupidity of their followers.

Professional photographer Peter Duke published a video this morning explaining how it was obvious to any media professional that CBS rigged the lighting and editing to make Bannon appear very different from what he really is. Continue to the next page to view the stark contrast between the unedited stills and the CBS maliciously edited final versions in this shocking video