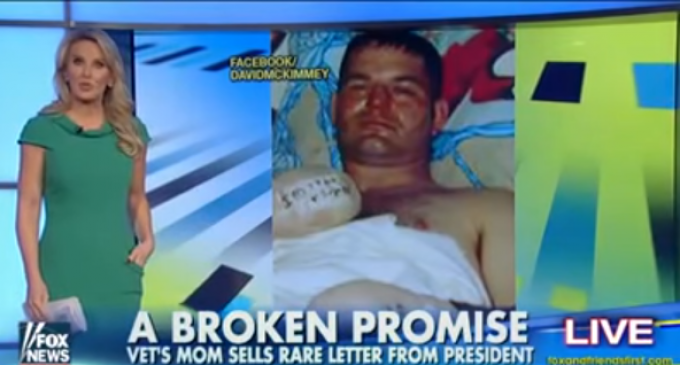 Cherry McKimmey, the mother of an injured Iraq war veteran, has decided to sell a rare letter from Barack Obama to cover for her son's medical and personal expenses. The irony? The letter was a written promise from Barack Obama to do “everything we can over the next four years to support your family.”

There is literally nothing that can better epitomize the state of veteran's care and the dismal state of the VA office than this situation. David McKimmey, the injured Iraq war veteran who earned a Bronze Star of Valor for attempting the save two buddies caught in a vehicle fire, was left with burns and scars on his face and hands and is at risk of losing his leg. He was classified as a vet with minor injuries, which barred him from special treatment. He was, essentially, forgotten by the government.

Read more about the McKimmey family's situation on page 2.