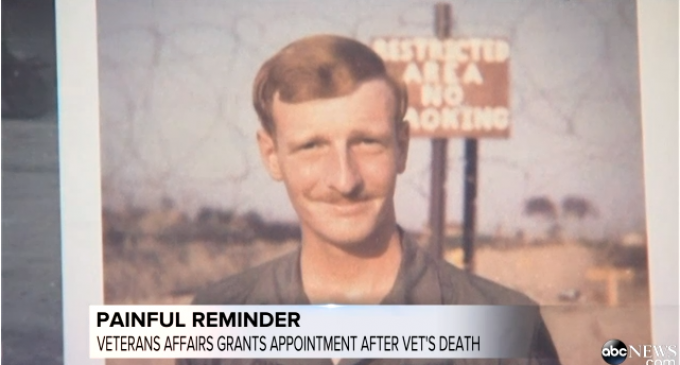 The Veteran's Affairs scandal sure has been forgotten fast hasn't it?

Vet Douglas Chase died of brain cancer in 2012…and he just received a letter granting him with a doctors appointment through the VA.

The Department of Veteran Affairs is apologizing for finally responding to a hospital appointment request letter, two years too late.

Suzanne Chase of Acton, Massachusetts, has been working to put the pain of losing her husband, Douglas Chase, to brain cancer, almost two years ago.

In 2012, a year after her husband’s diagnosis, Chase attempted to move his care in Boston to a nearby veteran’s hospital in Bedford. She said they waited for four months with no reply but Doug died in August 2012.

Just two weeks ago, Chase received a letter from the VA finally responding to her appointment request.

“The letter invited him to make an appointment with primary care at the VA, if he so desired. Then at the bottom they said they wanted a quick response,” Chase told ABC’s Boston affiliate WCVB.

The VA letter concluded, “We are committed to providing primary care in a timely manner and would greatly appreciate a prompt response.”

“I was absolutely stunned, to say the least. Really? Seriously? They are sending me a letter now? I don’t have words to describe it,” said Chase.

As if adding salt to the wound, her Vietnam veteran husband was denied veterans funeral benefits because he was never actually treated at a veterans’ hospital.

“I feel like our vets should be our number one priority. I am concerned that a healthy veteran with a medical condition will have to wait until it becomes a catastrophic condition. This isn’t fair for people who serve our country,” said Chase.

“We regret any distress our actions have caused to the Veteran’s widow and family. At the Department of Veterans Affairs our most important mission is to provide the high quality health care and benefits Veterans have earned and deserve – where and when they need it,” a VA spokesperson told ABC News. 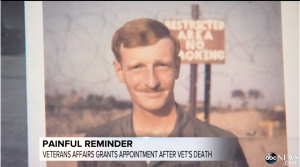