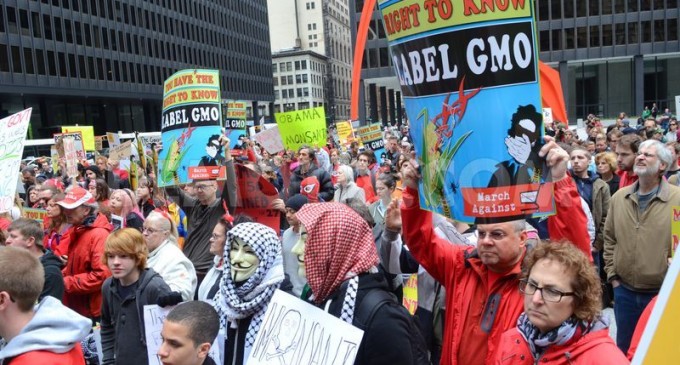 Vermont recently passed  a Genetically Modified Organism (GMO) labeling law, because, of course, you should know what you're eating.

Monsanto and the Grocery Manufacturers Association (GMA) claim that GMO foods are safe, yet they don't want you to know you're eating them – they filed suit June 12th to over turn the law.

The GMA is a “who’s who” of some of the most powerful food corporations known for abusing consumers’ trust and serving up some of the worst health-damaging “manufactured food” found in grocery stores.  Some of the key members of the GMA include well-known brand names like Coca-Cola, PepsiCo, The Hershey Company, General Mills, Unilever, Kraft Foods, Del Monte Foods and the H.J Heinz Company, as well as agri-food/GMO giants Monsanto, Cargill and ConAgra.

According to the Organic Consumers Association, years of good old-fashioned work, and playing by the rules helped the grassroots labeling movement achieve its first real victory this year, when Vermont passed the first no-strings-attached law requiring mandatory labeling of foods containing GMOs. Every citizen deserves the right to know what he or she is eating. Every state deserves the right to protect its residents and its environment without being threatened by multi-billion dollar corporations.

The danger in this lawsuit extends far beyond the beautiful state of Vermont. Even though state regulators are confident that their labeling law is just and will hold up in court, you cannot underestimate the sphere of influence and deep pockets of the GMA and its members. A loss to these corporations would jeopardize similar GMO labeling legislation in 29 other U.S. states. This may be the goal of the GMA: to intimidate law makers and citizens who believe people should have freedom of choice when it comes to the food they eat and how it is made.

Even people who advocate for genetically-modified organisms in food or remain ambivalent to the whole GMO issue should be concerned about this lawsuit. Labeling food with its true ingredients should not be a problem when there is nothing to hide.  The GMA’s lawsuit is another alarming example of the erosion of rights and freedoms at the state and citizen level. As a consumer, it is your right to know what companies are passing off as food and you should be free to expect this basic protection from your regulators and law makers.  Vermont’s GMO labeling bill is not treading on the individual rights of Americans, it is upholding them.