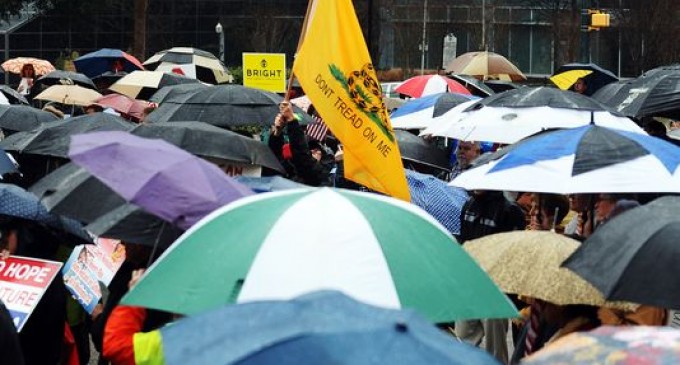 A recent column in USA Today illustrates how Americans are finally rising up against federal government tyranny, but instead of calling it ‘government' tyranny, they use the words ‘Americans ruling class'.

They cite 3 examples where Americas successfully pushed back tyrannical measures:

– Department of Homeland Security canceled plans to build a nationwide license plate database.
– The FCC withdrew a plan to “monitor” news coverage at broadcast stations and at print publications (that the FCC didn't even have authority to regulate)
– Massive civil disobedience in Connecticut as hundreds of thousands of people refuse to register their firearms in accordance with new laws

Of course, “America's ruling class” has already anticipated pushback and are experienced dealing with it. So long as we act only in reaction to them, instead of creating problems for them to deal with, I seriously doubt they have much concern for our ‘pushback'.

America's ruling class has been experiencing more pushback than usual lately. It just might be a harbinger of things to come.

First, in response to widespread protests last week, the Department of Homeland Security canceled plans to build a nationwide license plate database. Many local police departments already use license-plate readers that track every car as it passes traffic signals or pole-mounted cameras. Specially equipped police cars even track cars parked on the street or even in driveways.

The DHS put out a bid request for a system that would have gone national, letting the federal government track millions of people's comings and goings just as it tracks data about every phone call we make. But the proposal was suddenly withdrawn last week, with the unconvincing explanation that it was all a mistake. I'm inclined to agree with TechDirt's Tim Cushing, who wrote: “The most plausible explanation is that someone up top at the DHS or ICE suddenly realized that publicly calling for bids on a nationwide surveillance system while nationwide surveillance systems are being hotly debated was … a horrible idea.”

On Friday, after more public outrage, the Federal Communications Commission withdrew a plan to “monitor” news coverage at not only broadcast stations, but also at print publications that the FCC has no authority to regulate. The “Multi-Market Study of Critical Information Needs,” or CIN (pronounced “sin”) involved the FCC sending people to question reporters and editors about why they chose to run particular stories. Many folks in and out of the media found it Orwellian.

How this program appeared was, like the DHS program, a bit of a mystery: FCC Commissioner Ajit Pai said: “This has never been put to an FCC vote; it was just announced.” But the blowback was sufficient to stop it for now.

Meanwhile, in Connecticut a massive new gun-registration scheme is also facing civil disobedience. As J.D. Tuccille reports: “Three years ago, the Connecticut legislature estimated there were 372,000 rifles in the state of the sort that might be classified as ‘assault weapons,' and 2 million plus high-capacity magazines. … But by the close of registration at the end of 2013, state officials received around 50,000 applications for ‘assault weapon' registrations, and 38,000 applications for magazines.”