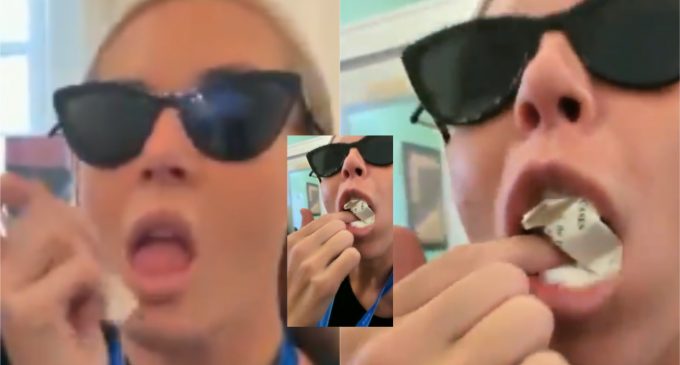 The U.S. National Women’s National Team (USWNT) is making headlines yet again after a video surfaced showing members of the team using paper from their gender discrimination lawsuit as confetti during their victory parade in New York on Wednesday. During one point, teammate Allie Long ate one of the papers while goalkeeper Ashlyn Harris said “pay us bitch.”

The lawsuit was filed last May in Los Angeles by the team of 28 members under the Equal Pay Act and Title VII of the Civil Rights Act and alleged gender-based discrimination by the U.S. Soccer Federation.

While the ladies claim that they are being underpaid due to ‘gender bias’ a closer look at the issue reveals facts quite contrary to their claim. There is actually a gender gap in U.S. soccer, but it actually the men who make less when you look at the percentages earned. Add to that the fact that women’s soccer sees far less revenue than men’s soccer. So to bring women’s actual paycheck up to par with the men’s would require that the percentage of profit paid out would likely make the entire sport insolvent.

Shortly before the Women’s World Cup finals kicked off, Senate Minority Leader Chuck Schumer (D-N.Y.) gave a shout out to the U.S. soccer team. Schumer took it upon himself to complain about how much less the female players get paid, in numeric terms, than their male counterparts.

“The women make just as much of a sacrifice, put in just as much mental and physical energy, absorb just as much risk of injury as the men who play for our national team,” Schumer said. “Yet, when you break it down, a women’s national soccer team player earns a base salary of $3,600 per game while a men’s player earns $5,000.”

An impassioned Schumer continued, “Discrimination is staring us all in the face. These women, who inspire our country with their poise, tenacity, skill and excellence every time they take the field, deserve to be fairly compensated.”

This is virtue signaling 101. In the United States, especially in politics, expressions of moral outrage play a prominent role. This sort of feigned righteousness is clearly intended to make the speaker appear morally superior. Schumer’s exaggerated feelings of outrage are clearly strategic. It’s reasonable to ask, whenever someone is expressing indignation, “Is he genuinely outraged or just virtue signaling?” Schumer is clearly signaling.

Now that the women have returned from France, triumphant and heroic, the calls for equal pay have never been as loud.