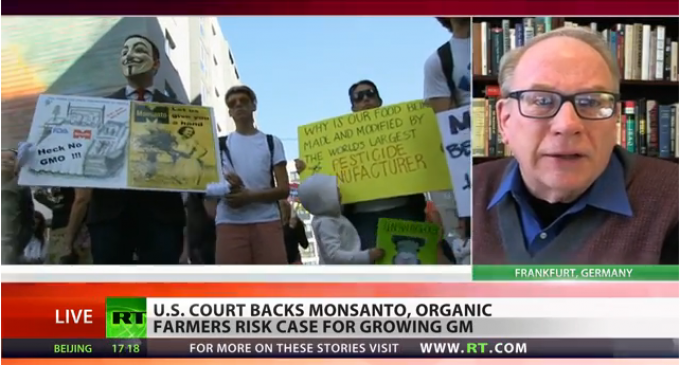 The US Supreme Court has once again backed up Monsanto's right to terrorize and sue farmers.

Monsanto's patented seeds ends up on other farms through wind – which blows them from one field to another. Monsanto then ‘discovers' this then sues or otherwise legally terrorizes the farmers, who end up going bankrupt or get forced into using Monsanto's seed.

Monsanto also has been very successful in blocking the labeling of their GMO seeds on American products.

The monopoly of Monsanto over our food continues as they buy up seed companies and force their products on farmers.

The very idea that one can ‘patent life' is absurd and opens up all of us to extreme exploitation. Can you imagine a corporation one day telling you that it owns the rights to your genes…that they own the kidney you just received in a transplant?

In 2009, the American Civil Liberties Union and the Public Patent Foundation brought a lawsuit, on behalf of more than twenty plaintiffs, against Myriad and the U.S. Patent and Trademark Office, challenging claims on Myriad’s patents and on the right of any company to patent gene sequences. (The company’s responding brief is here, and a collection of documents pertaining to the suit, assembled by the Genomics Law Report, can be found here.) On April 15th, after several years of appeals and reversals, the Supreme Court will hear arguments on the essential issue: Should human genes be patented?