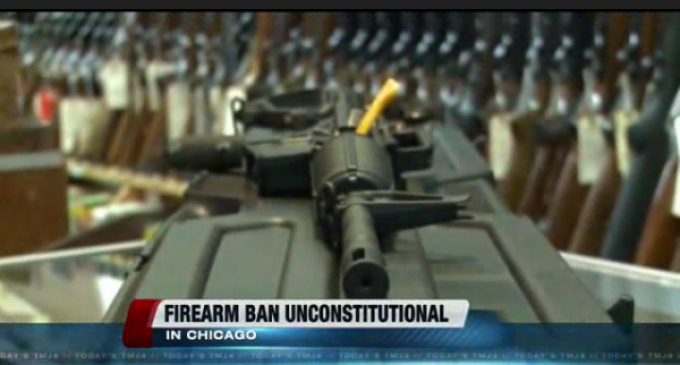 Judge Edmond Chang has ruled that it is unconstitutional to prohibit licensed gun stores from operating inside Chicago, which has had one of the strongest handgun crackdowns in the country.

Chang found that the city's “blanket ban” on sales and transfers of firearms violates the Constitution.

City officials disagree with the ruling, of course, stating that Chicago police confiscate more illegal guns than officers in any city in the country, so more gun control is needed.

Will these guys ever realize that gun control only serves to arm criminals?

The fact that so many illegal guns are recovered only supports the argument that honest citizens need to allowed greater access to firearms so that they may defend themselves.

Good citizens outnumber criminals BY FAR. So you arm good citizens to the teeth, a gun on every hip, and you will see gun violence against honest people drop right off!

If criminals want to shoot each other…well I won't be the one to stand in their way.

A federal judge on Monday stripped away a key element of Chicago's gun ordinance, ruling that it is unconstitutional to prohibit licensed gun stores from operating in the city.

U.S. District Judge Edmond Chang found that the city failed to convince him that banning the sale of guns by licensed dealers was necessary to reduce gun violence.

The ruling also would make it legal for individuals to transfer ownership of a firearm as a gift or through a private sale as long as the recipient was at least 18 and had a firearm owner's identification card.

Chicago, the last city to allow residents to have handguns in their homes, once had one of the strongest handgun crackdowns in the country, making it a primary target of the National Rifle Association.

The latest court ruling in the long legal fight came one day after Illinois, the last state to approve a concealed carry law, began accepting applications from residents who want to carry concealed firearms in public.

But gun shops won't likely be showing up in Chicago any time soon, since Chang delayed his ruling from taking effect to allow the city time to appeal.

Roderick Drew, a spokesman for the city's Law Department, said in a written statement Monday that Mayor Rahm Emanuel “strongly disagrees” with the judge's decision and has instructed city attorneys “to consider all options to better regulate the sale of firearms within the city's borders.”

“Every year Chicago police recover more illegal guns than officers in any city in the country, a factor of lax federal laws as well as lax laws in Illinois and surrounding states related to straw purchasing and the transfer of guns,” the city's statement said. “We need stronger gun safety laws, not increased access to firearms within the city.”

Since the U.S. Supreme Court forced the city to rewrite its firearms ordinance in June 2010, the city has faced a series of legal blows from the lower courts.

Gun rights advocates said they feared the city would stall the process, using zoning and other regulatory measures to make it difficult for businesses and individuals who want to open a store. After the U.S. 7th Circuit Court of Appeals overturned Chicago's ban on gun ranges in 2012, the city rewrote the law but added restrictions that made it difficult to find a location in the city to open a range, gun advocates said. That case still has not been resolved.

Todd Vandermyde, Illinois lobbyist for the NRA, said Chang rejected all of the city's arguments in his 35-page decision.