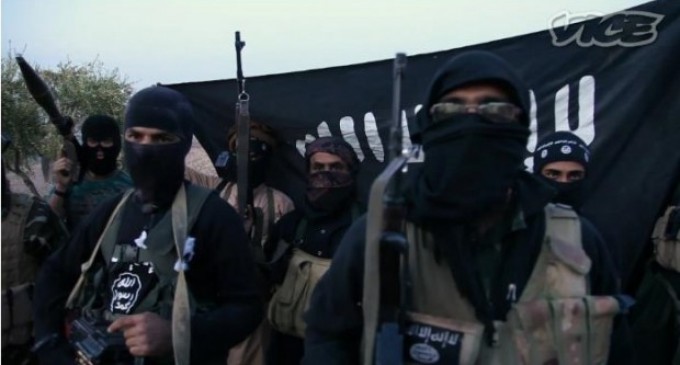 Watch this video of Syrian rebels that is backed by our own government state that they will attack us!

They charge the people of the United States and UK for not removing from office government officials that are committing crimes against their people.

They say this even as we provide support to them.

The insanity of what we’re doing in the Middle East must stop. Not only is America too broke to be meddling in the affairs of other countries, we certainly do not have a government with an adequate moral compass to do so in the first place!

British citizens fighting with Jabhat al-Nusra, aka Nusra Front and Islamic State of Iraq and Syria (ISIS) made a video in which they say their next targets are the United States and Great Britain:

“I say to United States that your time will come and we will bleed you to death and, inshallah [Allah willing], will raise the flag in the White House.”

“My feeling is great, hamdullallah (thank Allah), I’m happy I’m here. And I’m here to please Allah… and I’m not here to please anyone else but Allah.”

The men remained masked and did not offer their names during the video.  Another British citizen blamed his government for crimes against Muslims.  He likened his objectives to those who murdered  Lee Rigby, the British soldier, with a machete last May.

“Like the guy in Woolwich, he explained that  David Cameron would never walk on the street, and he’ll never get shot in the face, whereas you guys who are soldiers, or just normal folk, will take the blame for the crimes that are committed worldwide by Britain itself so we have to fight. It’s part of our obligation…to protect our honor, to protect our women.”

There have been recent reports that a rift has occurred between the Nusra Front and ISIS.  In the video, members of both groups were seen hugging as a way of dispelling those rumors.  With so many citizens from different countries, these groups have many interpreters who can translate their statements into almost any language.

Another rebel denied the story of the practice known as “sexual jihad” in which devout Muslim women travel to the from and give their bodies to the fighter’s pleasure.  He blames those stories on the Shiites.

Rep Mike Rogers, chairman of the House Intelligence Committee, summed it up this way,  “At some point all of these people from Europe are going home. All the folks there from all over the world, including the United States, will be coming home if they do not meet their end on the battlefield.”