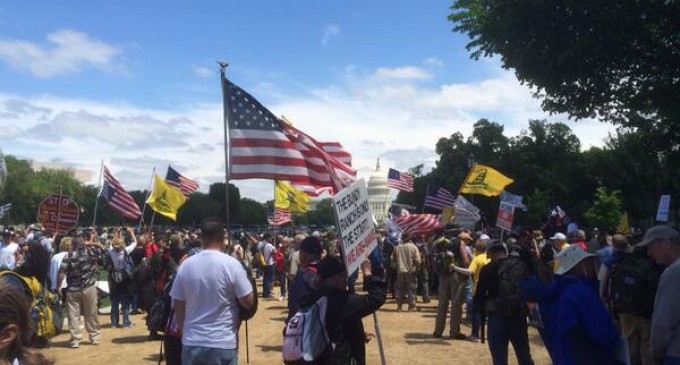 We are into the second day of the march on Washington known as Operation American Spring and it’s still very difficult to gauge the actual numbers so far.

Nobody is really reporting reliable turn-out numbers supported by overhead photos and the mainstream media is trying to downplay the event.

One thing is for sure, the Washington Times and The Blaze are under reporting the numbers. Stating the turn-out is ‘dismal’. Glenn Beck, instead of under reporting and speaking negatively about the event, why are you not telling everyone to get their ass down there!?

We know that the feds have trolls on the web spreading lies and certainly they are in these feeds to downplay the event. They want this operation to go away and if they can make you feel that there isn’t any kind of turn out, maybe more won’t show up.

But from what we can see of the video feeds, live streams, some of the photos and the chat, the numbers do seem to be in the thousands.

There were a lot of people held up in their camps yesterday due to heavy rain, and we can now see them in feeds marching today. Also, there are reports that bikers “Rolling Thunder” have stated they will have 500k-750k bikers in Washington this Thursday, the 22nd.

The numbers certainly are not in the ‘millions’ as originally intended and promoted, at least not yet. This does seem to be more of ‘an event in the making’ than some sort of ‘overnight fix’.