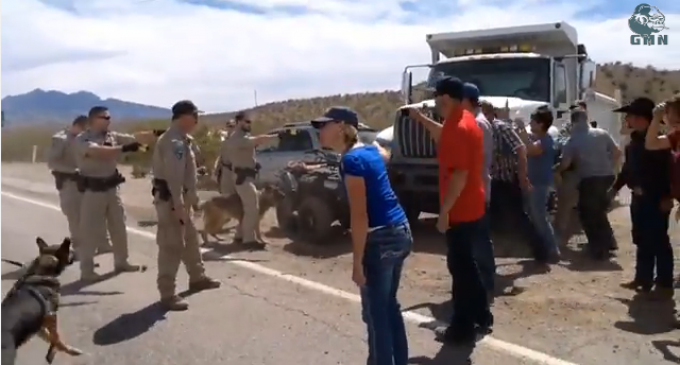 ABC News reported Sunday that the BLM siege of the Bundy Ranch has cooled off, somewhat and federal agents are no longer attempting to seize privately-owned cattle.

Cliven Bundy’s fight with the Bureau of Land Management (BLM) sparked a Waco-like mobilization of federal agents, including such ridiculous overreach as government disruption of cell towers, FAA flight prohibition over the 600,000 acre ranch and designated “First Amendment Zones” where agents would presumably permit folks to exercise their constitutional right to communicate.

Fearing government action similar to the Bureau of Alcohol, Tobacco, and Firearms (BATF) seige in 1993 of the Mount Carmel Compound in Waco, TX, militia groups immediately traveled to Nevada in support of the Bundys from around America, some from as far away as New Hampshire.

Cliven Bundy went head to head with the Bureau of Land Management over the removal of hundreds of his cattle from federal land, where the government said they were grazing illegally.

Bundy claims his herd of roughly 900 cattle have grazed on the land along the riverbed near Bunkerville, 80 miles northeast of Las Vegas, since 1870 and threatened a “range war” against the BLM on the Bundy Ranch website after one of his sons was arrested while protesting the removal of the cattle.

“I have no contract with the United States government,” Bundy said. “I was paying grazing fees for management and that’s what BLM was supposed to be, land managers and they were managing my ranch out of business, so I refused to pay.”

The federal government had countered that Bundy “owes the American people in excess of $1 million ” in unpaid grazing fees and “refuses to abide by the law of land, despite many opportunities over the last 20 years to do so.”

However, today the BLM said it would not enforce a court order to remove the cattle and was pulling out of the area.

“Based on information about conditions on the ground, and in consultation with law enforcement, we have made a decision to conclude the cattle gather because of our serious concern about the safety of employees and members of the public,” BLM Director Neil Kornze said.

“We ask that all parties in the area remain peaceful and law-abiding as the Bureau of Land Management and National Park Service work to end the operation in an orderly manner,” he said.

By Sunday, April 6, one of Bundy’s sons, Dave Bundy, was taken into custody for refusing to disperse and resisting arrest, while hundreds of other protesters, some venturing from interstate, gathered along the road few miles from Bundy’s property in solidarity. Dave Bundy was later released.

A spokesman for the Bundy encampment told ABC News roughly 300 protesters had assembled for the protest, while a BLM representative estimated there were around 100 people.