Collins blanketed his social media for support for the shooter Thaddeus Faison. 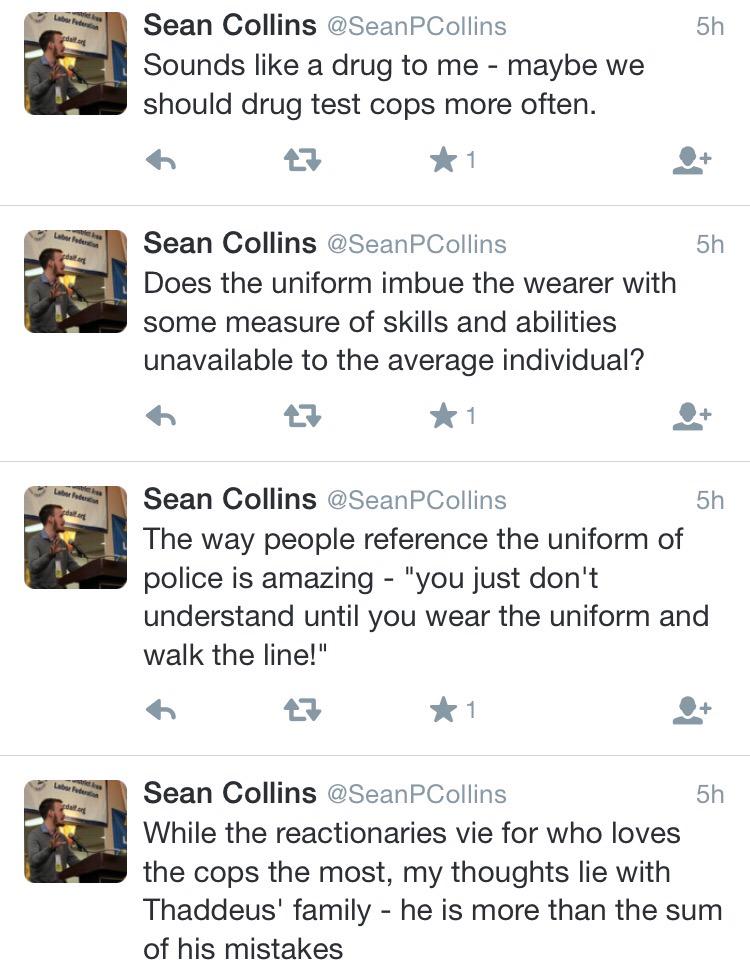 The whole incident was captured on audio and is posted on the Albany Times Union facebook page (about half way down the page under “sidewinder's photography”.  There's purely no doubt that the officer's were fired on first, one took several rounds to the shoulder, the other to the legs. The officers were able to return fire, saving their lives, but ending the life of Thaddeus Faison.  Yet, in this atmosphere of cop hating, thanks to groups like #Black Lives Matter, all types of liberal Marxists anarchists, are coming out from under their rocks.  What it must be like to have a loved one wear the badge today, leave to go to work, and wonder if he will make it home.

Collins’ initial ire was raised by a tweet from mayoral candidate Rodney Wiltshire, a Democrat who offered prayers for the officers.  Wiltshire wrote, “Please say prayers for our officers who were just shot in the line of duty.”  The SEIU employee responded forcefully, “AND FOR THE SUSPECT TOO, FFS.”

The response seemed peculiar, since Collins’ SEIU colleagues at Local 200 United, as well as 1199 SEIU, have endorsed and supported Wiltshire in his run for mayor of Troy — and his previous campaign for city council.

Under fire, Collins refused to back down from his controversial remarks, tweeting hours later, “While the reactionaries vie for who loves the cops the most, my thoughts lie with Thaddeus’ family – he is more than the sum of his mistakes.

We all our more than the sum of our “mistakes”, but some “mistakes” are graver than others.  Thaddeus Faison was known for violence on the streets.  This was not his first offense.  He decided to carry a gun, and try to car jack a “friend's” car.  He decided to run from the police, knowing the police were informed by onlookers that he had a weapon.  And then he decided to do something that was probably influenced by these hate groups, instead of surrendering, he decided to try to kill two policeman.  His intent was death for them.  He decided that–one can make the leap—because all cops hate blacks, and all cops are just out to shoot blacks.  His decisions, or his “mistake” was listening to cop haters, like Black Lives Matter.  Good for you BLM.  Why is BLM not prosecuted for “hate sppech?”  Maybe Thaddeus would be alive today, Sean Collins Union Organizer.