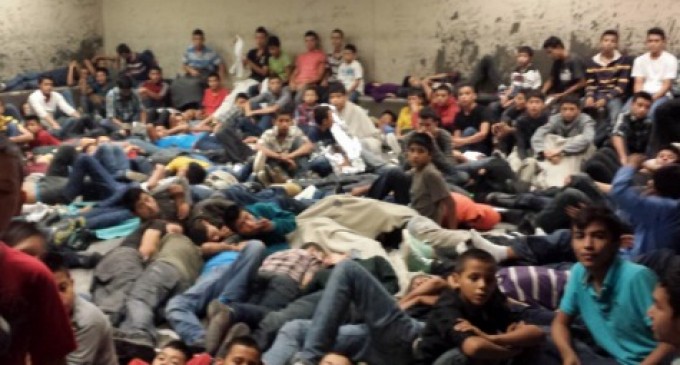 Do you really think that the most powerful nation on earth can't stop 12-year-olds from crossing our border? If the federal government really wanted to end this problem they could.

The problem is that they don't. This is not an ‘immigration problem', it is a “state-sponsored invasion.”

I certainly sympathize with these kids, it's heartbreaking to see this, and the detention centers are surely a better option for them than where they came from, but we must recognize this for what it is: part of an intentional effort to destroy this nation.

“Given the deteriorating security and economic conditions in the Central American countries where most of these children and adult immigrants came from, it's hard to understand how DHS didn't see this coming,” Longmire said. “The trend towards increased cross-border movement towards south Texas and away from Arizona has been apparent; the trend of Central Americans starting to outnumber Mexican crossers has been apparent. Even worse is believing that DHS knew this was coming, but didn't have the resources or ability to cut through bureaucratic red tape to prepare more quickly.

“Now the results of this mismanagement are thousands of individuals living in inhumane conditions for an indeterminate period of time, as well as exhausted and overwhelmed Border Patrol agents and CBP detention facilities,” Longmire continued. “The Obama administration's band-aid fix has been to ship a good portion of these immigrants — many of whom are weak, emotionally vulnerable, sick, and confused — to other sectors as far as San Diego county in California and release them with no obligation other than to show up for a hearing in 15 days.

“Most of those released will abscond and never show up for their hearings, taking their chances that ICE won't have the time or resources to go looking for them,” she added. “Until they can get to where they want to go, they're overwhelming local community resources in cities like Laredo, El Paso, and Tucson that haven't had enough time to prepare for this ‘solution.' This is an awful way to showcase what cartel and gang violence is doing to children and their families in Central America, and it's a humiliating example of what our government's inability to develop solid immigration and border security policies can cause.”