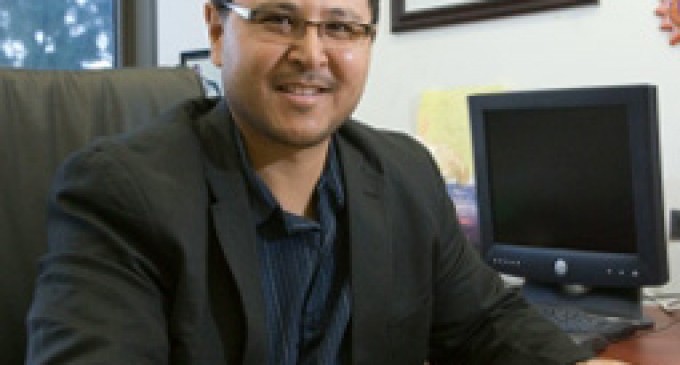 “To love them as myself requires that I support structural change to our nation’s health care system,” he states. “The Affordable Care Act is far from perfect, but it is a strong step away from the status quo and towards loving our neighbors as ourselves.”

Asked why Jesus would support amnesty, he states: “Jesus would have us extend compassion towards immigrants who are made in His image. In Matthew 25, Jesus teaches that if our love for Him is sincere, then we will have a heart of compassion for immigrants.”

Hmmm, so Jesus would have supported lawlessness and completely open borders…and death panels?

I am assuming here that Prof. Chao isn't privileged to the information that the man behind Obamacare is the same one killing Christians via the Muslim Brotherhood.

But the way Romero sees it, Jesus would support immigration reform, affirmative action – even the Affordable Care Act – and it’s part of a message he gives to college students to teach them about “Jesus’ heart for justice,” he tells The College Fix.

Romero recently published a free ebook, “Jesus For Revolutionaries,” which spells out in detail why he believes Jesus would support all three measures.

When it comes to Obamacare, Romero said he – and Jesus – support it because “50,000 of my neighbors in the United States die each year for lack of meaningful healthcare.”

“To love them as myself requires that I support structural change to our nation’s health care system,” he explains. “The Affordable Care Act is far from perfect, but it is a strong step away from the status quo and towards loving our neighbors as ourselves.”

It’s the same concept behind immigration reform and affirmative action, he adds.

“Any time immigrants and the poor are marginalized and exploited, I believe that God wants us to implement changes to society which alleviate their suffering and restore their dignity as children of God,” Romero said in an email to The Fix.

“God identifies with the suffering of immigrants and the poor, so much that He teaches that when we interact with them, we are actually interacting with Him,” Romero said. “If we truly love God, then we will also love the poor and disenfranchised. It is impossible to truly know God and continually exploit the poor and marginalized.”

Over the last seven years, Romero has slowly built up a ministry among college students in the greater Los Angeles area, one that galvanizes young people to volunteer and mentor for various urban ministries. He also launched a “Christian Students of Conscience” campus club that is unique to UCLA, but works with students across Los Angeles.

Pastor Romero, who was ordained by a small, black interdenominational council of churches in South Los Angeles, describes himself as a “pastor to the pastor-less,” adding: “Many of the students we mentor don’t have a close relationship with any church.”

The vision of Christian Students of Conscience, according to its Facebook page, is to launch “Jesus-centered movements of justice and racial reconciliation at UCLA and at colleges and universities throughout the United States and abroad.”

Romero trains and mobilizes students around issues of poverty, justice and race, and provides a community of faith for students passionate about those issues.

Christian Students of Conscience is billed as a place for students who care about social justice but find no place to express their concern in traditional church settings and campus ministries.

“Sadly, many Christian college students have walked away from church and their commitment to Christ because they viewed the organized church as irrelevant to the needs and concerns of the poor and people of color,” its website states.

Romero said his work inside the classroom does not overlap with his efforts as a pastor.

He wrote Jesus For Revolutionaries in his spare time and from the perspective of “a Chinese-Mexican, Asian-Latino, Jesus-loving pastor, lawyer and professor of Chicana/o studies and Asian American studies.”

Asked why Jesus would support amnesty, the professor said: “Jesus would have us extend compassion towards immigrants who are made in His image. In Matthew 25, Jesus teaches that if our love for Him is sincere, then we will have a heart of compassion for immigrants.”

By quoting the Bible, Romero said he believes he provides evidence to back his viewpoint that “Jesus transcends all human political structures-both of his own day and our own.”

Is Jesus a Republican or Democrat? Romero said he’s neither.

“That being said, as for His humanity, He was from a poor Jewish background and He lived under the oppression of Roman imperialism,” Romero said. “Jesus knows what it is like to be poor and marginalized.”

Romero said he supports immigration reform, and so does God.

“I support immigration reform because millions of undocumented immigrants are being exploited as cheap labor, torn apart from their families through unjust deportations, and scapegoated by racist laws such as Arizona SB-1070,” he said. “God makes it clear through dozens of Bible verses that we are not supposed to exploit immigrants.”

As for affirmative action, Romero cites 2 Corinthians 8:13, which states: “Our desire is not that others might be relieved while you are hard pressed, but that there might be equality.”