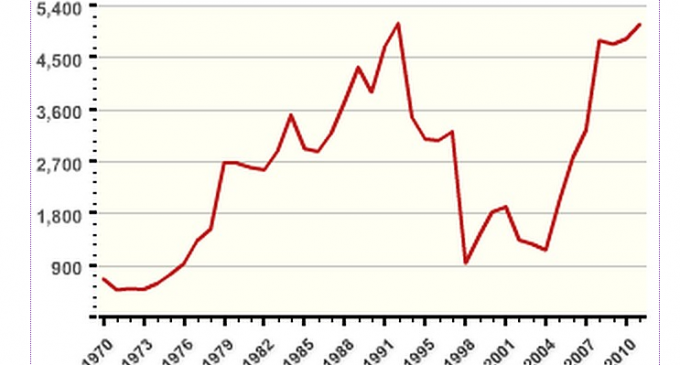 So for all of our efforts, our trashed economy and the loss of our freedoms in fighting terrorism, terrorism has INCREASED!

The National Consortium for the Study of Terrorism and Responses to Terrorism (START) Global Terrorism Database – part of a joint government-university program on terrorism – is hosted at the University of Maryland.

START is the most comprehensive open source terrorism database, which can be viewed by journalists and civilians lacking national security clearance. A quick review of charts from the START database show that terrorism has increased in the last 9 years since the U.S. started its “war on terror”.

One of the principal causes of terrorism is injuries to people and families.

The Iraq war wasn’t even fought to combat terrorism. And Al Qaeda wasn’t even in Iraq until the U.S. invaded that country.

And top CIA officers say that drone strikes increase terrorism (and see this).

Furthermore, James K. Feldman – former professor of decision analysis and economics at the Air Force Institute of Technology and the School of Advanced Airpower Studies – and other experts say that foreign occupation is the main cause of terrorism