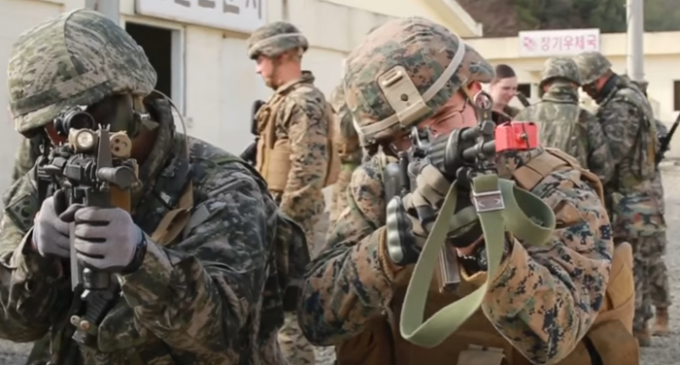 In the wake of a new military budget being passed in Congress, Donald Trump has claimed an important victory in the struggle to fund a once severely under-financed fighting force.

Despite the Associated Press blathering on today about how President Trump got nothing in return for all his bluster and that, thanks to the angelic Democrats in Congress, we avoided an important shutdown that would have (of course) been thrust upon America by the evil and gutless Republicans, the president was able to shore up the military in a big way.

Regardless, establishment Republicans still managed to show how utterly spineless and ineffective they are when feigning actual work on behalf of the people.  Be assured that the details of why they decided to fund a bail-out of Puerto Rico and continue Planned Parenthood funding will arrive in our mailbox any day now (don't hold your breath).

The funding for the military, thankfully, couldn't come at a better time.  Now that it appears North Korea's leader Kim Jong-un is about as mad as the Hatter, Army General Raymond A. Thomas “stated in testimony to a House subcommittee that Army, Navy, and Air Force commandos are based both permanently and in rotations on the Korean peninsula in case conflict breaks out.”

U.S. special operations forces are on high alert and are being dispersed to a wide range of over 80 countries in an effort to ensure that stability will be maintained in the event of a nuclear strike on the U.S. or its allies.

These special forces will include the Army's Delta Force and the Navy's SEAL Team 6.  However, these two will be given the most secret direct action operations that will be carried out without advance notice to most upper echelon military commanders in order to observe the utmost advantage.

General Thomas said that the command took over the role of coordinating Pentagon efforts to counter weapons of mass destruction in January from the Strategic Command.

Special Ops commandos have been preparing for many contingencies under the new operations policies set up by the Trump administration that frown upon advance notice of any strategies or military strikes.  This severely hamstrings the enemy and bolsters the U.S.'s chances of having little to no fatalities or injuries.

The specific operations list looks to be something right out of a James Bond novel.