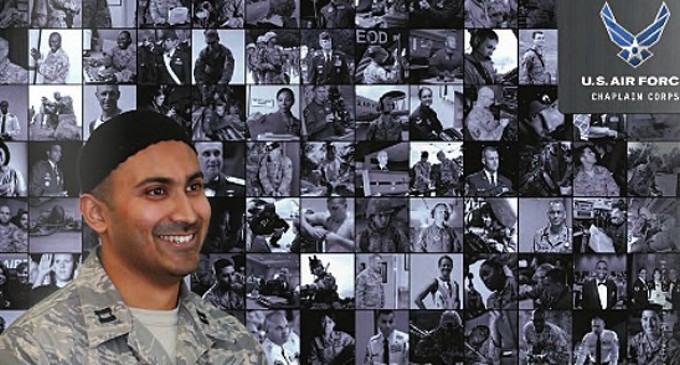 Muslim Brotherhood entity, The Islamic Society of North America (ISNA), has announced that the U.S. military is once again using their chaplains for active-duty service after a 15-year lull.

Make no mistake, the ISNA has a well-documented extremist history.

The Muslim Brotherhood listed ISNA as one of its main fronts in '91. And, declassified FBI memos state that the ISNA is a component of the Muslim Brotherhood, who sees its “work in America as a kind of grand jihad in eliminating and destroying the Western civilization from within.”

The Islamic Society of North America (ISNA), a U.S. Muslim Brotherhood entity, is proudly announcing that the U.S. military is again using their chaplains for active-duty service after a 15-year lull.

ISNA has a well-documented extremist history. In 1991, the Muslim Brotherhood listed ISNA as one of its main fronts. Declassified FBI memos said ISNA is a component of the Muslim Brotherhood, who sees its “work in America as a kind of grand jihad in eliminating and destroying the Western civilization from within.”

In 2007, the U.S. government labeled ISNA a U.S. Muslim Brotherhood entity and an unindicted co-conspirator in a terrorism-financing trial involving the Holy Land Foundation funneling money to Hamas. The label was upheld in 2009 because of “ample” evidence linking ISNA to Hamas. Last year, ISNA’s Canadian affiliate lost its status as a charity because of its accounting discrepancies and links to Pakistani terrorists.

The two chaplains endorsed by ISNA are Sgt. Mustapha Rahouchen, who will be used by the U.S. Army, and Captain Rafael Lantiqua, who was chosen by the U.S. Air Force.

In April 2013, the Clarion Project broke the story that the U.S. Air Force Chaplain Corps had paid ISNA almost $5,000 for two advertisements in its magazine. When we contacted the Air Force about ISNA’s ties to the Brotherhood, we received the following response:

“The Islamic Society of North America is one of many religious organizations recognized by the Department of Defense that satisfy the ecclesiastical requirements to endorse qualified religious ministry professionals to serve as chaplains within the Military Departments.”

This story speaks to the broader threat posed by Islamist involvement in Muslim chaplain programs.

The Muslim chaplaincy services for the military and prisons were started by Abdurrahman Alamoudi, who was convicted in 2003 on terrorism-related charges. He later admitted that he was a secret member of the U.S. Muslim Brotherhood.

ISNA is one of the groups that the U.S. military trusts to certify Muslim chaplains. The military’s former endorsing agent was Dr. Louay Safi, an unindicted co-conspirator in the trial of Palestinian Islamic Jihad leader Sami al-Arian. Safi, like Alamoudi, later admitted to having been a Brotherhood operative.

Safi wrote in 2003, “The war against the apostates [non-believers of Islam] is carried out not to force them to accept Islam, but to enforce the Islamic law and maintain order.”

He continued: “It is up to the Muslim leadership to assess the situation and weigh the circumstances as well as the capacity of the Muslim community before deciding the appropriate type of jihad. At one stage, Muslims may find that jihad through persuasion or peaceful resistance is the best and most effective method to achieve just peace.”

In 2004, he said that the “assertion by ‘world leaders' that the war on terrorism is not a war on Islam is nothing but a piece of propaganda and disinformation that was meant to appease Western Muslims and to maintain the coalition against terrorism.”

He was later suspended from working on U.S. military bases because of a criminal investigation. Safi is now working with the Syrian Muslim Brotherhood.

Dr. Zuhdi Jasser, a Muslim activist opposed to Islamism who served in the U.S. Navy, wrote in 2010 that a friend of his in the U.S. Army recently told him of his troubling interaction with an active-duty Muslim chaplain.

His friend asked the imam what his response would be if a Muslim soldier asked him if Islam prevented him from participating in combat against fellow Muslims. The answer should have been easy: Serve your country as you swore to do. Instead, the imam said he’d tell the soldier that he’s not qualified to answer the question and to ask ISNA.