This applies to “longtime California residents with relatives who are U.S. citizens and… young migrants whose parents brought them into the country illegally” who deported themselves between 2009 and 2013. One ACLU official states that there were nearly 250,000 people who were “deported voluntarily from Southern California between 2009 and 2013” and the Los Angeles Times verifies that the “number of repatriations could reach into the hundreds or thousands.”

Gee, thanks ACLU! The A in ACLU stands for ‘American' as much as our elected officials stand for our Constitution.

According to the settlement, the federal government will advertise on television channels like Univision, ESPN Deportes, MundoFox, El Universal, and the Univision Deportes Network. They will also partner with People en Espanol and even the Mexico National Football Team in addition to placing billboards “in high population Mexican border cities of Tijuana, Tecate and Mexicali, as well as focusing placements near border crossings.”

U.S. officials will also place “radio ads :60 in length… on top Spanish speaking radio stations near the Mexico/U.S. border.” Those who search for “Lopez Case,” “Lopez Class Action,” “Voluntary Return to Mexico,” “Rights for Detainees,” “Detained by ICE,” and “Returned to Mexico by ICE” will also be targeted with information about the settlement. 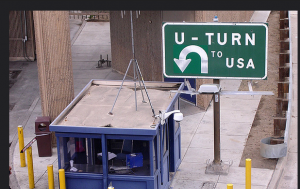