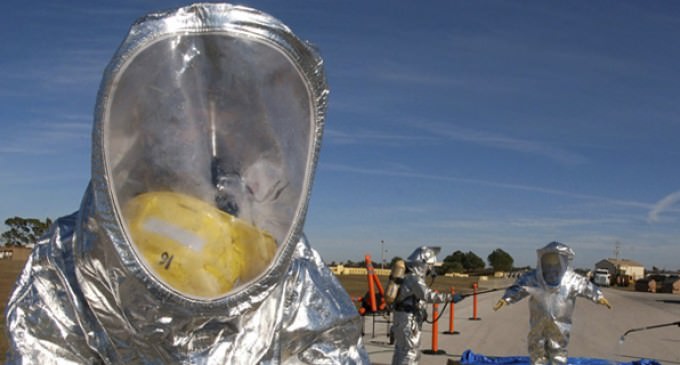 The U.S. government has ordered 250,000 Hazmat suits to be sent to Dallas, TX, the first location of an Ebola outbreak in America.

This purchase of a quarter million Hazmat suits is an indication that health authorities are concerned about the spread of Ebola in Dallas.

The purchase of a quarter of a million Hazmat suits to be sent to Dallas confirms that health authorities are still very concerned about the spread of Ebola after two nurses in the city who cared for patient zero, Thomas Eric Duncan, contracted the virus earlier this month.

In an interview on the Alex Jones Show last week,Doctor James Lawrenzi revealed that Hospital Corporation of America (HCA), a private operator of health care facilities, had removed protective gear and Hazmat suits from local hospitals without replacing it. Lawrenzi also revealed that potential cases of Ebola were going unreported and that patients were being “disappeared” from hospitals.

As we reported earlier, PPE distributor Lakeland Industries announced yesterday that it had received 1 million orders for Hazmat suits from government agencies worldwide, a press release that prompted the company’s stock price to soar by 30 per cent in after-hours trading.

Lakeland initially hit the headlines in September after revealing that it had received an order from the U.S. State Department for 160,000 Hazmat suits.

Other federal agencies like the National Institutes of Health are also stockpiling PPE gear in anticipation of an unnamed “emergency event” disrupting the supply chain at some point in the future. Infowars also confirmed with numerous distributors that the federal government is exhausting supplies of Hazmat suits and that stock is being placed on hold for “government needs”.