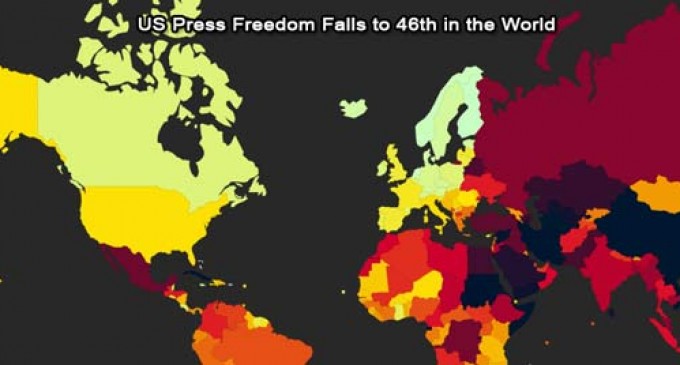 According to press advocacy group Reporters Without Borders, freedom of the press in America has plummeted during President Obama’s two terms, which he promised would be the “most transparent administration in history”. Reporters Without Borders compiles  a global survey to produce a World Press Freedom Index. The analysis of official abuse, media independence and infrastructure  indicates the U.S. dropped 13 positions from 32nd to 46th out of 180 countries during President Obama’s rule.

“Journalists are being caught up in what is, I think, fairly characterized as a rapidly growing surveillance apparatus, and this is happening all over the world,” said Geoffrey King, Internet advocacy coordinator for the Committee to Protect Journalists.

In the past years, tactics have shifted from surveillance of individual terrorists and spies to a dragnet approach to control information, Mr. King said.

Delphine Halgand, Reporters Without Borders U.S. director, said three events shaped the climate for reporting in the United States last year: Mr. Snowden’s NSA revelations, the trial of Army Pvt. Bradley Manning for giving a trove of classified documents to WikiLeaks, and the Justice Department’s handling of a probe of The Associated Press and other media organizations suspected of receiving leaked data.

“I hope this revelation will play a wake-up-call role,” Ms. Halgand said.

Do you still think the United States is a ‘free country’?